So, you want to dress Capitol for your next night on the town? SheKnows asked Elizabeth Banks all the juicy details on how she styled out as Effie Trinket for her new movie The Hunger Games. Apparently, being Effie is about as high maintenance as it comes. 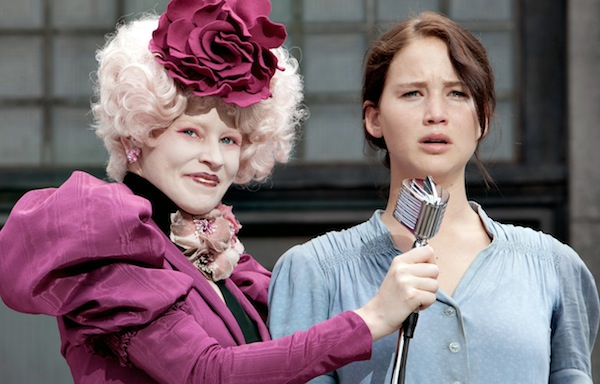 “I loved that we used flowers and I had butterflies on my eyelashes,” says actress Elizabeth Banks as she sits down with SheKnows for a one-on-one interview to discuss the most important question of all — what was it like to transform herself into Effie Trinket for The Hunger Games?

Based on the best-selling novel about a post-apocalyptic society that pits children against each other to fight to the death, The Hunger Games tracks the life of Katniss, the teenage girl from the poorest area of the country who is sent to the Capitol to fight. 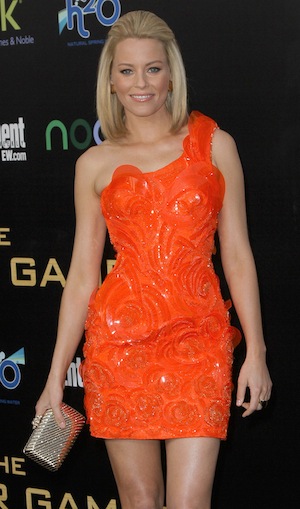 Banks was a huge fan of the book, so when she heard that director Gary Ross was attached to write and direct the film, she jumped at the chance to get onboard. “We made Seabiscuit together,” she says, reminding us of her adorable portrayal of Marcela Howard in the emotional drama about horse racing. “So, I sent him an email and said I wanted to play Effie,” she says.

What did her old buddy Ross say to that? “Yeah, Banks, I know, I gotta find Katniss,” she says he replied. That cracked her up. But she understood immediately that his priority was to figure out who would play Katniss. Eventually, he cast Jennifer Lawrence to be his heroic archer from the poor region known as District 12.

Banks’ character Effie is the symbol of all things Capitol. She’s assigned to shepherd Katniss through the training process. “Katniss loves nature and respects it, and it’s her livelihood. And for Effie, it’s adornment. It’s practically meaningless.”

Banks was inspired by the contrast. She says the costume designers definitely were, too. “The clothes were really very oppressively hard to wear which was appropriate. And we used a lot of nature… Because, that’s all in direct contrast to Katniss..”

Effie’s clothing, hair and nails were done in the utmost opulence. A little too overdone, at times. Apparently, the bejeweled nails Banks wore while filming kept her from being able to go to the bathroom by herself. “I had all these ladies in waiting that would help me do everything. So, I was like, ‘It’s time to go to the bathroom!’… I mean three people had to go with me. I felt like that was very Effie.”

If you think that sounds tough, imagine not being able to use your cell phone. “I couldn’t type, I couldn’t blackberry, I could not do anything with the nails.” Banks had to soak her hands at the end of every day just to get them off. “The nails were impossible,” she says. 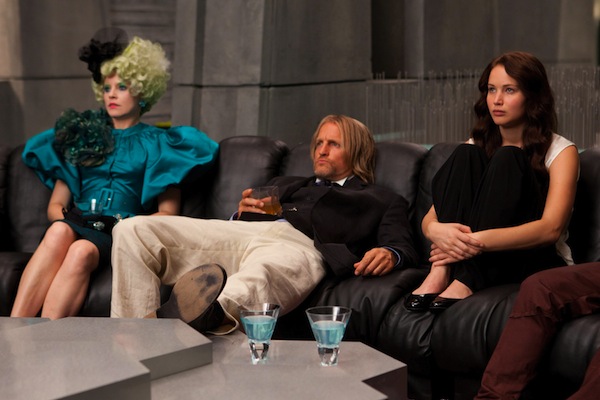 But what about those disco lashes? They look fabulous. “They are a little weird and uncomfortable for the first hour, but then you get used to them.”

Banks laughs but explains that it comes with the territory. If you’re gonna be Effie, you’ve got to be Effie. It’s tough but it’s also fun. “My favorite costume was when I’m watching the results, and I wear the big puffy sleeves.”

When asked if there would be another fim in the series, Banks played cool. We know the filmmakers behind The Hunger Games have to be aware that the fan base wants more. But as for the details, they’re going to keep them under wraps for now.

Look inside: The Hunger Games premiere >>

Personally, what does Banks think will happen next? “Jennifer Lawrence is going to be a world wide international superstar. Liam and Josh are going to have a lot of female fans. There will be posters on my niece’s walls. She’s going to desperately try and get me to introduce her to them. I’m sure she’ll make a set visit next year.”

Oops. A set visit? Did that slip?

Banks quickly covers. “If we get to make the next films,” she says. Don’t worry. Your Effie secret is safe with us.