Beyoncé showed off her post-baby body again last night, looking more slim and trim than ever. How did the new mom do it? The answer is easy — but it’ll cost you. 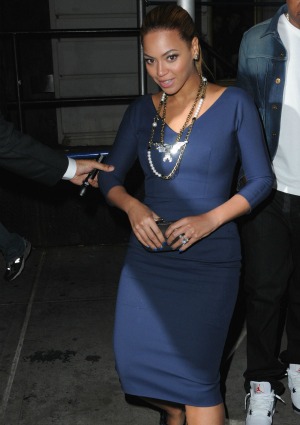 Beyoncé has already dropped a ton of baby weight since the birth of her daughter Blue Ivy, and the success has not come without a lot of hard work. But can the average mom achieve the same success?

Star Magazine reports that the star’s personal trainer Marcos Borges has taken up residence in her home and is working her out — hard.

“Beyoncé and Marco are up at 5 a.m. for a two-hour workout, and they do it again at 5 p.m.,” a source told the magazine. “They do a mix of cardio, Pilates, plyometrics, yoga and, of course, dance.”

In addition to the strenuous workouts, Beyoncé is closely monitoring what she puts in her body, “living on protein shakes, egg-white omelets, pineapple chunks and lots of ice-cold water.”

“She’s exhausted but totally dedicated,” explains the source. “Beyoncé’s vowed to have a better body than ever before… and she’s a woman of her word.”

Katy Perry gets passive aggressive about Beyoncé and Shakira