Kim Zolciak is pregnant! The Real Housewives of Atlanta star, and mother of three, has dropped a baby news bomb. 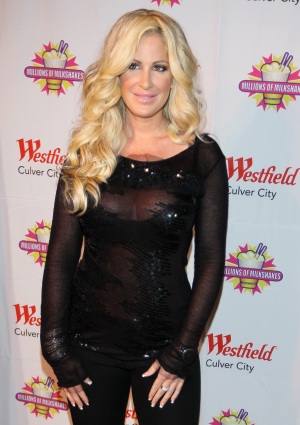 Kim Zolciak pregnant? You’d better believe it! Despite having given birth just last May the Real Housewives of Atlanta star is already four months along with another baby!

Kim Zolciak‘s baby news comes as a surprise to fans, just the way she wanted it. The reality star, who can be seen showing off her new baby bump on the latest cover of Life & Style, confirmed the happy news admitting, “People are going to be shocked, because nobody knows.”

The 33-year-old and her new husband Kroy Biermann have yet to find out the gender of their second child together. The pair welcomed son Kroy Jagger (nicknamed KJ) last May, and she also has two daughters from her previous marriage to Dan Toce.

No matter if the baby is a boy or girl, Kim Zolciak shared, “I’m so excited that KJ will have a little buddy.”

“Kroy and I are so excited,” the Real Housewives of Atlanta member, who exchanged vows on Nov. 11, 2011, went on to say. “To decide we wanted to get pregnant again and have it happen so quickly was such a blessing.”

Kroy, equally responsible for the one-woman baby boom going on in Atlanta, began dating Kim in May of 2010. Not quite two years later the pair have tied the knot, welcomed a son and have another baby on the way! This fast-moving couple’s fairy tale wedding was filmed for their Bravo show, Don’t Be Tardy For The Wedding, which can be seen on April 26 at 9 p.m.

Gather up the Real Housewives of Atlanta girls, it’s time for another baby shower!

Congrats go out to the whole family on Kim Zolciak’s pregnancy news!