Is Katy Perry a secret Beyoncé hater? She made some eyebrow-raising comments about Blue Ivy’s mom during a U.K. interview. She’s treading on thin ice, here. 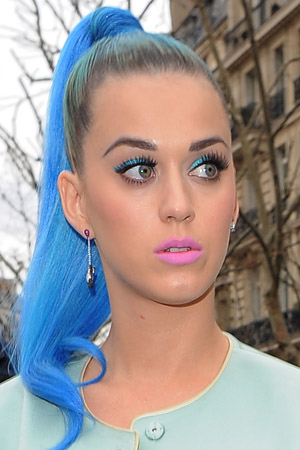 Apparently Katy Perry has Beyoncé and Jay-Z on the brain. The “Teenage Dream” singer managed to butcher Hov’s song with Kanye West, “N****s in Paris” during a Monday performance on BBC’s Radio One. Now? She’s dissing Bey.

During an interview, the host asked the newly-divorced singer if she’ll ever duet with her BFF, Rihanna.

“[Rihanna and I have] collaborated on a lot of things, but just not songs yet. It’s one of those things that’s got so much build up that we have to deliver. I want it to be like that Eurythmics and Aretha Franklin song ‘Sisters Are Doin’ It for Themselves,’ not ‘Beautiful Liar.’ But I definitely want to do something that is so iconic.”

“Beautiful Liar” was the collaboration between Beyoncé and Shakira — and no, it wasn’t exactly iconic, but it’s still our jam. Also, they looked like twins in the video.

This isn’t the first time Perry has insulted one of her pop star colleagues. The Christian-raised singer took issue with Lady Gaga‘s video for “Alejandro” back in 2010.

“Using blasphemy as entertainment is as cheap as a comedian telling a fart joke,” she tweeted at the time.

Then again, her bestie also dissed her too, saying she didn’t want to do “generic pop” like her pal. “Every song was tailored to me,” Rihanna said before the release of Loud in 2010. “I didn’t want the generic pop record that Ke$ha or Lady Gaga or Katy Perry would do. I wanted Rihanna songs only I could do.”

Meow. Do all pop singers secretly hate each other? We think the answer is a resounding “yes!”

Perry doesn’t do all the dissing, though — songwriter Linda Perry dissed her back for her brand of simplified pop music.

“It’s just different, it’s different,” the former Pink collaborator said during an August 2011 interview. “You listen to the Adele record, and I’m not a huge fan of Adele, it’s a solid record. A solid record, and it’s selling. OK? So that means people are still buying records. It’s the crap, like who wants a f***ing Katy Perry record? I’m sorry, you know? You’re gonna get the two songs that are probably the hits that are good, but the rest of the album is gonna be crap.”

Ladies, ladies, ladies: Can’t we just get along? There’s enough crap in the world without the Mean Girls routine. Also, Katy? You don’t want the Illuminati after you for dissing its leader, right? That’s what we thought.