When Bethenny Frankel’s skirt flew up in front of Anderson Cooper’s live audience she had one thing to be thankful for. The Skinnygirl creator dishes the panty-flashing scoop! 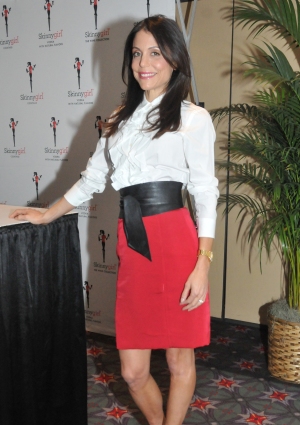 In the aftermath of Bethenny Frankel‘s panty-flashing Anderson appearance, there is one thing the red-faced reality star can be thankful for: Cute panties. Check out a video of the wardrobe malfunction seen around the web below!

Bethenny Frankel and panties paid a recent visit to Anderson Cooper, and while not wise enough to turn down a push-up challenge, she did take her husband’s advice in the underwear department.

Explaining the incident to iVillage the Skinnygirl mogul said, “I just had no idea that doing a push-up would turn into such a YouTube and web phenomenon, I mean this is crazy, I am so happy that I had underwear that were nice because I have had these sort of nude colored, they call it commando panties that are just kind of, just boring, they are not that interesting.”

“And my husband hates them and he was like you need to get interesting, sexy panties, so last week I bought colorful panties. And I happened to by the grace of God be wearing the same colored panties as my shoes. I mean the odds of that are the odds of my dress flying over my head doing push-ups actually.”

After the incident did Jason Hoppy give Bethenny Frankel an “I told you so” speech? She said, “He said, ‘Can you imagine those other, the nude colored panties being on TV?’… The problem is that this is such a misrepresentation of me because it makes me look like someone who matches my panties to my shoes.”

“I love that I am being made to be this fancy, you know fashionista when it comes to the undergarments and I’m not but I’ll take it,” Bethenny Frankel added, looking on the bright side of becoming a panty-flashing web phenomenon. “I just think it’s funny. It’s ridiculous. It’s just something that would only happen to me. That’s the one thing that everyone who knows me says.”