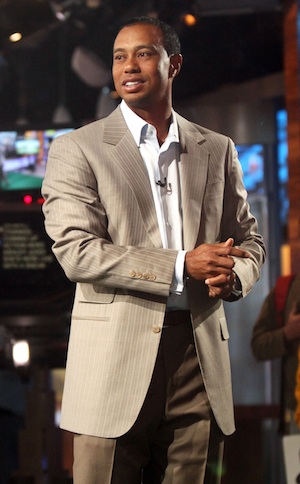 Wow, the dynamic between Tiger Woods and ex-wife Elin Nordegren just got a lot creepier. During their relationship, the Daily Mail reports Nordegren was prohibited from smiling while Woods was on the golf course. This revelation comes from Tiger Woods’ former coach, Hank Haney, as he releases a new tell-all book titled The Big Miss.

Woods may have some control issues but Haney says the rule forbidding a warm and friendly wife has more to do with his extreme expectations of himself. When Elin wanted to celebrate a win at Torrey Pines shortly after the two were married, Woods calmly but assertively explained his perception of victory. Hank writes he overheard Woods say, “E, that’s not what we do… We’re supposed to win.”

Hank says he saw Elin’s personality change quickly as her marriage to Woods wore on over the years. “As life became more complicated, I thought Elin changed… She and Tiger developed a calm, almost cool relationship in front of other people, and conversations with them tended to be awkward and strained.” He continues, “I never saw them argue, but they weren’t openly affectionate either.”

And perhaps foretelling of Woods’ numerous adulterous affairs, Hank says Tiger Woods even made other professional golfers uncomfortable with his obsession with pornography. When Woods and fellow golfer Zach Johnson had to share a hotel room in 2006 in Ireland, Haney revealed Woods “immediately purchased the adult-movie 24-hour package and turned the television on” even though Woods was aware of Johnson’s devout Christian beliefs.

Shockingly, these details are not the only stories in the book. Haney also talks about Woods’ impatient and rude attitude towards fans and friends. Haney recalls Woods regularly skipping out on many restaurant tabs, leaving his friends to pick up the bills.