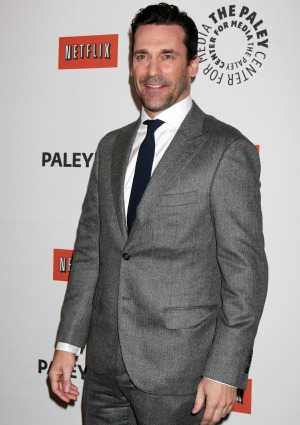 Jon Hamm is defending his dismal view of reality stars like Kim Kardashian and Paris Hilton. The Mad Men star drew attention when he told Elle how little respect he has for peeps who gain fame for nothing worthwhile — and Kim fired back. Now Hamm is speaking up — again.

First, what did Hamm say to start the whole business? In the April issue of Elle U.K., the star said, “Whether it’s Paris Hilton or Kim Kardashian or whoever, stupidity is certainly celebrated. Being a f*****g idiot is a valuable commodity in this culture because you’re rewarded significantly.”

Kim was not amused by Hamm’s comments, firing back, “I respect Jon and I am a firm believer that everyone is entitled to their own opinion and that not everyone takes the same path in life. We’re all working hard and we all have to respect one another. Calling someone who runs their own businesses, is a part of a successful TV show, produces, writes, designs and creates, ‘stupid,’ is, in my opinion, careless.”

Now Hamm is defending himself — and says if the shoe fits…

“I don’t think [my comments] were careless,” he said during an appearance on The Today Show. “I think they were accurate.”

Jon Hamm and January Jones are no Don and Betty >>

“It’s a part of our culture that I certainly don’t identify with,” he explained, “referring to the reality TV phenomena, “and I don’t really understand the appeal of it other than in a sort of car crash sensibility. It’s not something that I partake in or enjoy, but it is what it is and here we are.”