Jon Hamm and January Jones are perfect portrayals of Don Draper and Betty Francis. But are they anything like their outlandish characters offscreen? 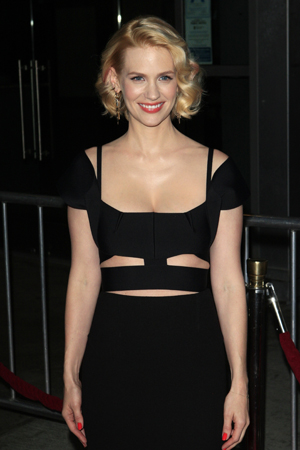 But such similarities mean nothing, as both actors swear they’re completely different from their onscreen counterparts in real life!

“If anything, I understand her even less,” she told Hollyscoop. “But in terms of mothering, I don’t carry anything ‘Betty’ home.”

Jones’ son, Xander, just turned six months, and has Jones mastering the balance between career and motherhood. “You just miss your child when you’re at work, but I think it’s really important to have something for yourself. It keeps you sane and it makes you a better parent,” she said. “It makes you not take it for granted.”

Just the same, Jon Hamm doesn’t idolize Don Draper with a drooling mouth — like the rest of us do!

“He’s not the greatest role model,” said the actor to the Pittsburgh Post-Gazette. “If you’re gonna base your life on someone’s behavior, I don’t think this is your guy. But I do find him a fascinating character, a fascinating creature. Matt [Weiner] has a very good handle on this character and knows how to write it and tells some pretty great stories. I’m happy to be a part of that.”

And for some reason, he is completely oblivious to his own good looks!

“I don’t necessarily think of myself like the handsome guy. That’s reserved for Brad Pitt and Ryan Reynolds and those guys,” he said. “But it’s certainly nice when people say nice things about you, don’t get me wrong. I guess I never really thought of myself that way. I just wanted to be a regular person and try to portray parts as varied as I could.”