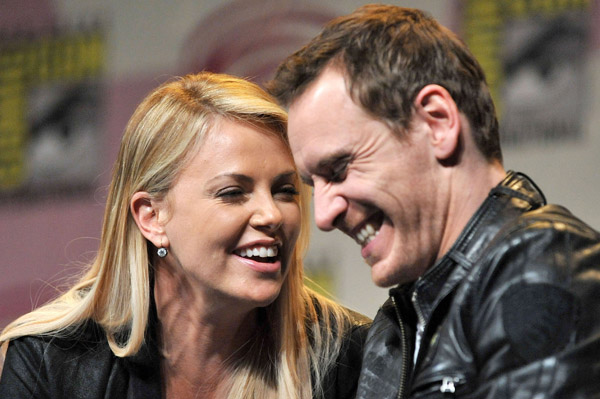 Charlize Theron might be a new mom, but that doesn’t mean she doesn’t crave a little alone time — if you know what we mean (wink, nudge). The Snow White and the Huntsman actress accepted an Ally For Equality Award during the Human Rights Campaign gala on Saturday night, but the only thing she could thank was actor Michael Fassbender‘s — ahem — member.

“I have to say that I was truly impressed that you chose to play it big,” she joked to the actor, referring to his constant onscreen nudity in last year’s Shame. “Most other actors would have gone small, trust me. I know because I’ve worked with them.”

And that wasn’t all.

“Your penis was a revelation,” Theron continued. “I’m available to work with it any time.”

The pair co-starred together in the upcoming sci-fi epic Prometheus, and it’s obvious they grew close during filming, hence all the wiener talk. We could totally get behind them dating — she dated another actor, Stuart Townsend, for nearly 10 years before they broke up in 2010.

Also, Fassbender likes to get it in at work — he dated his X-Men co-star, Zoe Kravitz, in 2011 and is rumored to be seeing his Shame co-star, Nicole Beharie. The two were spotted arm-in-arm in NYC’s SoHo last week.

His potential mates can relax, though — he’s not the crazy sex addict he portrays in the indie flick.

“I was a bit worried that I’d perhaps bitten off more than I could chew,” he told The Hollywood Reporter recently. “But I’m always interested in trying to investigate different personalities. I want to keep myself guessing and keep the fear element alive, so that I don’t get too comfortable.”

We have to agree with Charlize: Just keep taking those kind of roles, Michael.