Michael Bay is at it again. He’s taking something near and dear to our hearts and bringing it the big screen. Only this time, he’s making some drastic changes. Have you ever heard of the Teenage Mutant Ninja Turtles? Well, they’re aliens now. 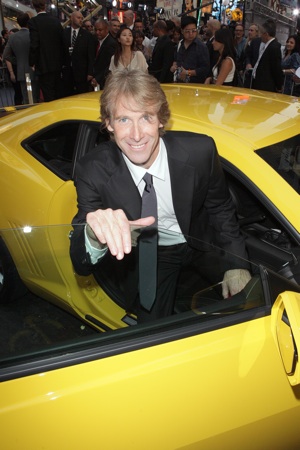 Director Michael Bay knows a thing or two about catering to fanboys. He’s the man behind the Transformers films, which have grossed over a billion dollars at the box office.

It’s no wonder he was tapped to produce another childhood favorite — Teenage Mutant Ninja Turtles. Or should we call them alien turtles? Bay recently revealed his plans for the reboot, which will rewrite the characters’ origins.

According to Entertainment Weekly, last week Bay made a major announcement at the Nickelodeon Upfront presentation. He divulged a key element from his live-action Ninja Turtle movie.

He proclaimed, “These turtles are from an alien race, and they are going to be tough, edgy, funny and completely loveable.” Huh? An alien race?

In the original story, four turtles (Raphael, Leonardo, Donatello and Michelangelo) fall down a sewer where they come in contact with a radioactive ooze. The ooze causes them to rapidly mutate into human-sized turtles.

But it sounds like Bay has another plan in mind. He’ll have an uphill battle with this one. The alien twist could isolate the Teenage Mutant Ninja Turtles’ fanbase. So hopefully, there’s more to the story.

The last time the Ninja Turtles appeared in theaters was in 2007. It was for the CGI-animated film, TMNT. Prior to that, the characters experienced success on both the small and big screens. Fans have seen several incarnations of the turtles, but their origin has remained the same. They’re mutants not aliens, hence their name — Teenage Mutant Ninja Turtles.

What do you think of Michael Bay’s turtle twist?