Katy Perry decided to make a spectacle of herself by rapping the Jay-Z and Kanye West song, “N****s in Paris.” WTF was she thinking? 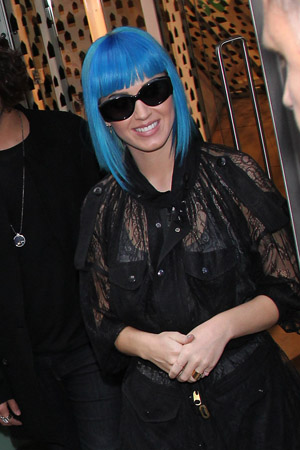 Katy Perry gave the audience a warning before she launched into her performance at BBC Radio One on Monday afternoon.

“This is about to get embarrassing,” she said, putting on a New York Yankees hat.

Well, that was the understatement of the century. The newly-divorced pop princess launched into a rearranged version of Kanye West and Jay-Z‘s hit ode to excess, “N****s in Paris,” changing some of the more racially-sensitive words to substitutes like “devil” and “ninjas.”

Maybe she thought it was okay because she enlisted West’s help on her “E.T.” remix? Yeah, she was wrong — really, really wrong. The whole performance was full of secondhand embarrassment, but we have to give Perry props for having the cojones to do it.

The blue-haired singer is in the U.K. promoting Teenage Dream: The Complete Confection, the reboot of her smash 2010 album featuring three new songs, including “Part of Me.” Is this the sign of a new, more intense Katy Perry? Yes, she said in a recent interview.

“Yeah, well, my music is about to get real f***ing dark,” she told Kirsten Wiig in the new issue of Interview.

“I’ve been thinking about my future and what the next move is in terms of what I need to do. I think it would be pretty stupid to try and redo this last record that had all of this success,” she said. “Maybe it’s time to do something that’s different, that can’t be compared. I just feel like I’m going to be criticized regardless of what I do next, so I might as well do something that I feel really passionate about.”

Well, she must feel really passionate about “ninjas” in Paris, then. Hey, we all need a cause.

What do you think of Katy Perry’s rapping?