After much speculation, hope and disappointment, it’s official: Jersey Shore will be back for season six, with at least one completely sober cast mate. 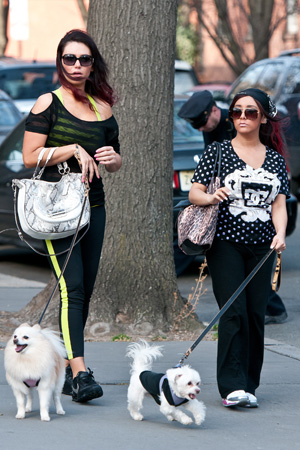 Just yesterday, it seemed like the cast mates of Jersey Shore were each splitting up onto different shows across the MTV network. Commercials are already promoting DJ Pauly D’s spin-off, JWoww and Snooki are filming their own show, and Ronnie unknowingly makes an appearance on an episode of Punk’d — while being pranked by Bam Margera!

However, the split will only be temporary, as the crazy crew refuses to say goodbye to summer months in Seaside Heights. People reports that all seven cast mates are set to return to Jersey Shore this summer to begin filming season six, according to a press release from MTV.

“The house dynamic is headed into unchartered territory as their lives outside of the Shore take off in exciting new directions,” the network says.

Will the show be more or less entertaining now that Snooki is engaged to Jionni LaValle and expecting a baby? It’ll be hard to imagine the mother-to-be working at the Shore Store while carrying a bun in the oven. Is it physically possible to “Jersey Turnpike” on the Karma dance floor with a pregnant belly?

“While things will definitely be a little different this time when they hit the boardwalk, their trademark hilarity and family dysfunction will remain the same.”

As long as we don’t see a pint-sized birthing session in the season six finale, we’re excited. Glad to have you all back!