Though she’s usually giving some smooth-talking playboy a piece of her mind (think Crazy, Stupid, Love), Emma Stone says she liked having the chance to play a more traditional female role in this summer’s big blockbuster, The Amazing Spider-Man. 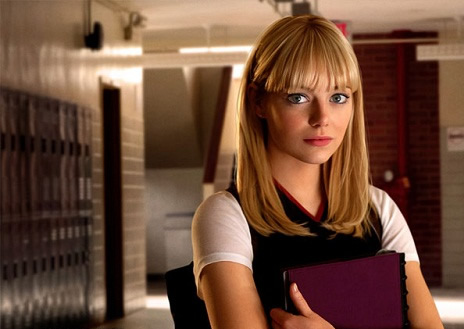 Emma Stone praises her character Gwen as a strong and loveable damsel in distress.

Emma Stone doesn’t seem like the type to need rescuing. But in her upcoming film, The Amazing Spider-Man, the actress said it was nice to play a more passive role for a change.

We caught up with the popular actress at WonderCon in Anaheim, California this weekend where she told us all about her character Gwen Stacy, a change from the heroine in previous Spiderman movies, Mary Jane.

“There’s an element of being a damsel in distress,” Stone said of Gwen. “I think it’s important women don’t always have to be just the one thing. They can be lots of things, including a damsel sometimes.”

But Gwen isn’t just a “damsel.” Stone told us that she is actually a very smart, independent woman as well.

“She is strong, and independent, and incredibly intelligent,” said Stone. “She’s the Valedictorian, and she has her life planned out ahead of her. She’s the oldest in the family and she feels very responsible so there’s a lot that she has together.”

So why would a woman with such a good head on her shoulders need rescuing?

“Everyone is stupid in love,” Emma told SheKnows. “Her first love is big, it’s Spider-man.”

As for her own big love, Emma remained tight-lipped on her relationship with co-star, Andrew Garfield. When asked how he filled out the role of Spider-man, Emma simply stated, “Pretty well.”

The movie also features Rhys Ifans as The Lizard, Martin Sheen as Ben Parker and Chris Zylka as Flash Thompson. It’s is set to hit theaters on July 3.

More on The Amazing Spider-man

Emma Stone and Andrew Garfield heat up Spider-man
Watch a teaser for The Amazing Spider-man
Movies: Why it’s the Year of the Superhero