It’s Jason Statham’s turn to step up to the Kim Kardashian bashing plate! Did the actor hit a burn out of the park, as his fellow stars have in recent weeks? 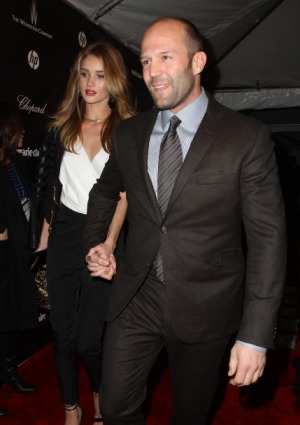 What does Jason Statham think of Kim Kardashian and the rest of the clan? In light of Daniel Craig and Jon Hamm’s digs at the first family of reality television, Details magazine wanted to find out.

Jason Statham, pictured here with Victoria’s Secret model and girlfriend Rosie Huntington-Whiteley, is known to many as the king of action films. The 44-year-old’s name is synonymous with hard-hitting films, and a preference for doing his own stunts. So does that make his image a brand that needs tending and management by a team of publicists?

After recent comments on the Kardashians made by Jon Hamm and others, Details magazine asked if Jason Statham also considers himself a brand, as the Kardashians are. Not pulling any punches, he replied, “F*** no, why should I?”

When asked if he believes people seeing earnings upwards of $30 million a film are a “brand in need of management,” Statham replied, “F*** ’em. Kim Kardashian’s a brand.”

Apparently plenty happy to leave the worries of keeping an image in check to the Kardashian family and other high profile stars with a team of personnel, Jason Statham went on to share how his past as a street hustler in South London prepared him for Hollywood.

“See, it’s that necessity for a bargain, that relentless thirst for a discount, that let me create the illusion,” he shared, Page Six reports. “That’s what we played on, and, you know, that’s all I ever really knew… So much of this industry is buried in bulls***. You’re pretending to be something onscreen, fine. But it’s also the way it plays out here, every day. ‘Yeah, we love you, can’t wait to put you in a movie.’ It’s f***ing bulls***.”

“Not to be entirely negative, mind you, because there’s so much talent here, so many people that are righteous,” he added, softening slightly for half a moment. “But believe me, there’s so much that ain’t, and you see that coming in so thick. I did it for a living. I see it before it enters the room. And usually I know just to point my compass elsewhere.”

Presumably, though Jason Statham passed on the opportunity to diss the Kardashian empire as his fellow actors have, that direction isn’t toward reality television.

Funny how the more image-conscious stars seem to be open to bashing the Kardashians, and yet loose-lipped Jason Statham passes on the chance to rant, isn’t it?