Wowing audiences with the remake of the popular TV series about a couple of twentysomething cops who have to go back to high school, this action comedy has legs. 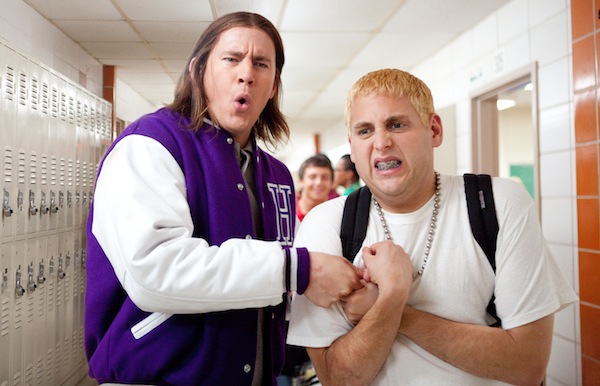 Taking in an estimated $34 million at the box office this weekend, the Jonah Hill and Channing Tatum action comedy about undercover cops in high school, 21 Jump Street, is the number one movie in America this week, according to Deadline Hollywood.

Rumor has it Johnny Depp even makes an appearance. For old and new fans of the popular TV show, studios are calling this a hit — Sony booked the sequel already. We saw that coming, didn’t you? Hope Johnny makes a showing in that one, too.

Coming in at number two this week is the movie about keeping it green when all you’ve got is plastic. The Lorax spent two weeks at number one and has grossed over $156 million. Will there be a Lorax 2, anyone?

Disney’s disappointing mission to Mars with a Civil War soldier,  John Carter, grabbed the number three spot this week with an estimated $13.2 million. The big budget sci-fi film seemed to have trouble finding an audience, despite the sexy biceps sported by hunky Taylor Kitsch.

Coming in fourth on this week’s list of top 10 is the sleeper hit Project X, the story of teens gone wild on their last night of high school. It grossed an estimated $3.9 million.

Eddie Murphy fans held onto second week potential for the funny man who’s not allowed to talk (there’s the problem, perhaps) in the comedy A Thousand Words, about a chatty book publisher who will die once his words run out. It grossed an estimated $3.6 million.

Act of Valor, which debuted at number one, held onto a top 10 spot at number six this week with an estimated $3.4 million. The Navy SEALs movie about a CIA agent who goes missing scored big with the military community.

Denzel Washington’s fast-paced thriller about a cop and a man on the run, Safe House, maintained interest for audiences bringing it in at number seven this week with an estimated $3.4 million.

Bronze and beautiful The Rock brought in fans again this week with an estimated $2.4 in ticket sales for his adventure movie Journey 2: The Mysterious Island.

Rounding out the top 10 are the romantic drama The Vow at ninth place with $2 million and Silent House at tenth with an estimated $2 million, as well. Two indie films starring big names, Casa de mi Padre, the Will Ferrell Spanish-language farce, didn’t make a dent with its limited release and Jeff, Who Lives at Home starring Susan Sarandon and Jason Segel held out to find audiences over the weekend as well.