Though Jermaine Jones may have an alleged criminal history, is it grounds for his dirty laundry to be aired on national television? The dismissed contestant speaks! 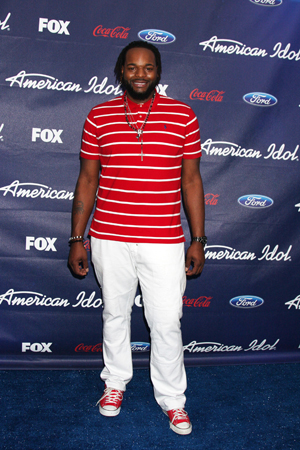 Earlier this week, we learned that contestant Jermaine Jones omitted an alleged criminal past to producers, consisting of two arrests and four current outstanding warrants. And though Fox gave fans a heads up that footage of his dismissal would air on Wednesday’s episode, even Jermaine Jones had no idea that it’d be a public discussion with American Idol executive producers Nigel Lythgoe and Ken Warwick.

“I did not know any of it. I was actually confused,” said Jones to People yesterday. “And I walked in and there were all these lights and cameras. I didn’t know what was going on.”

Jones claims that he did disclose that he was arrested in the past, but producers clarified that they cannot allow those with outstanding warrants to compete on American Idol — a detail that Jones was not aware of.

“I did not know I was breaking the rules, because before I went, I had to obtain a lawyer and take care of some fines before I could go. I just thought everything was taken care of,” he explained.

He collected a few warrants for giving a false name twice, driving with a suspended license and an alleged fight. “They were all minor charges but of course it was a big deal. Who wants a criminal past? It was a very big deal for me.”

However, Jones is not letting his very public dismissal from Idol tear down his dreams of making music. “People will judge me or hold it against me, but I don’t know anyone that doesn’t have a past,” he said. “I’ve been getting myself together, working on some new music and looking forward to recording soon… I feel amazing. I have amazing fans and an amazing team.”