That’s right, we skipped work to see it! After reading The Hunger Games Trilogy as if our lives depended on it, gripping the books for dear life, we thought it appropriate to play hooky and catch the movie to see how it stacks up on the big screen. 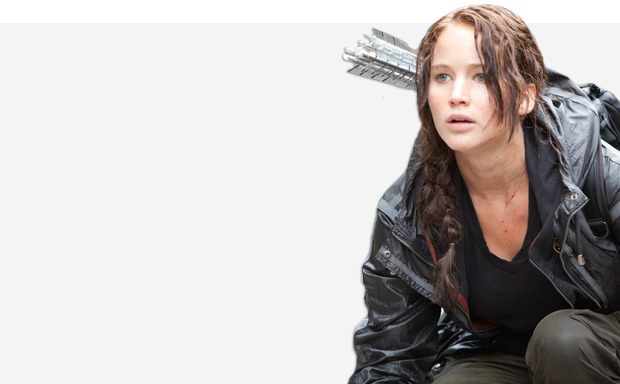 Gettin’
our game on

That’s right, we skipped work to see it! After reading The Hunger Games Trilogy as if our lives depended on it, gripping the books for dear life,
we thought it appropriate to play hooky and
catch the movie to see how it stacks up on the
big screen. Find out: Did it live up to the book?
What’s the scene you just can’t miss? And the
cast: Did Jennifer Lawrence light up as
Katniss, the girl on fire?

It stuck to the book’s story line and stole our hearts with every scene… (for the most part)! Though we’re in favor of the book, we’re already planning our trip to the second film!

I really enjoyed it. I’m glad I read the book first and the movie surprisingly fit perfectly with the story I had in my mind.

Team Peeta or Team Gale?: Peeta started to grow on me, but I’m still team Gale. If this were real life, she would pick Gale — every time.

Spoiler alert! My favorite scene was when Rue died and we saw District 11’s reaction. It was a beautiful blend of both the first and second books.

Katniss and Cinna didn’t hook up. I mean, it was headed there.

Peeta really surprised me. I think Jennifer Lawrence did a great job, but Peeta came out of left field a little bit for me.

Hunger Games. Hands down. I can’t believe I wasted my life on Twilight.

I was riveted, start to finish. You know a movie is good when your bladder is full ¼ of the way in and you choose to wait till the end credits to go to the restroom.

Peeta for the winnnnnn! (But I would totally do a Peeta and Gale sandwich, if it were socially acceptable).

The “Girl on Fire” scene. Also, the countdown scene pretty much took my breath away.

WTH? Why did they change the mockingjay scene? Boooo.

Seriously, everyone did an off-the-charts amazing acting job. Peeta’s character by far surprised me. Um, HELLO, those eyes. But Jennifer Lawrence as Katniss really stole the show. Bravo.

Seeing this amazing novel, that I’ve read more than once and read with my family, come to life in the theater was an exciting, edge-of-your-seat experience.

Book versus the movie:

If you’ve read the book there’s an entire deeper appreciation, experience and level of engagement. Though the movie was amazing — and very true to the book — hands down the novel wins.

I loved the way the Capitol came to life with the costumes, the color, the crazy over-the-top, over indulgent Capitol people.

Gale wasn’t on screen more. I wanted to see more of him!

Jennifer Lawrence for sure — she was perfect as Katniss. I also adored Lenny Kravitz as Cinna and Elizabeth Banks as Effie was nearly unrecognizable!

While I love Twilight as much as the next Twi-mom, The Hunger Games is a literary masterpiece.

Homerun! There were a few minor explanations missing in the movie but overall, I was squeezing my fists together the whole time, despite knowing how it ends.

Though I was more impressed with Peeta then expected, I can’t stop thinking about Gale and how tall, dark, handsome and perfect for me he is!

Katniss running from the fire attack of the gamemakers. On the flipside, I was disappointed with the first kissing scene between Peeta and Katniss; she could have really gone for it!

They kept the gore under control, but the visuals of young kids becoming lifeless was slightly shocking.

I was surprised and impressed by Peeta, but Jennifer Lawrence was perfect for Katniss. I can’t think of someone better for the role!

Since I haven’t read the book yet (I know, I know), this was fresh, and completely new for me. I was literally on the edge of my seat curled up in a little ball with knots in my stomach. I empathized with Katniss immediately and fell completely in love with her. Loved the movie!

My favorite scene of the movie is when Katniss teams up with Rue.

That Liam Hemsworth isn’t in more movies. Also the careers were so vicious and seemed like they were looking forward to killing everyone.

First off, I did not read the book. The genre of the film is listed as action, drama and sci-fi, and I have to ask how is hunting humans not categorized as horror? Nevertheless, I’m prepared for my lashing: I did not love the movie.

If you didn’t read the book:

I found the movie confusing in parts. What did the three finger salute mean? Was smokin’ hot Liam Hemsworth Katniss’ boyfriend? Was it just Peeta’s strategy to say he had a crush on Katniss? We only see two parachutes fall the entire time! How utterly useless were these sponsors? What was the time frame here; how long were they playing The Hunger Games?

Peeta didn’t kill anyone. Physically, she carried the team. So emasculating.

Jennifer Lawrence. She was stunning and convincing.

I really enjoyed the story line but the visuals and fashion of the Capitol really did it for me. Love, love, loved the colors!

We can’t wear eyelashes like that every day! So bummed down.

Fashion of the Capitol.

I was impressed with the acting more than I thought I would be. Overall, the movie exceeded my expectations for it.

The scene best adapted into film?:

The scene where Katniss volunteers for Prim.

The Hunger Games… because there is no such thing as a vampire, duh.

I was not disappointed. A few tidbits weren’t completely explained to the extent they were in the book, but the story followed perfectly and the important things were all there. I was completely captivated and want to see it again. Now.

Team Gale. Every time I thought I was starting to switch over to team Peeta, they flashed to Gale’s strong, yet sad and endearing eyes and I melted. If Katniss chooses Peeta, I’d be happy to comfort and console Gale.

The scene where Peeta blended in with the ground. The makeup job was immaculate and if I hadn’t read the book, I almost wouldn’t have realized it was Peeta at first. That, and the fire dress that swirled flames while Katniss was spinning. I want one.

Haymitch never fell off the stage and he and Katniss didn’t bump heads as much as they should have. He was almost likable from the start.

Everyone. Everything about Katniss (Jennifer Lawrence) was exactly as I had imagined and every other character really blew my mind. Oh, and Stanley Tucci was a phenomenal Caesar.

No question — The Hunger Games. I can’t wait for the next movie. I could barely make it through the first Twilight.

The movie was two and a half hours long but I walked out wanting more!

Book versus the movie:

Book was amazing, a page turner no doubt. It was romantic, energizing and I never wanted to put it down. The movie was thrilling and I caught myself holding my breath but overall I have to choose book.

Both! Seriously, I can’t decide.

The reaping was exactly as I imagined!

Katniss! I couldn’t take my eyes off her.

If you didn’t read the book…

Though you might be confused at some moments, the action will keep you tense and wondering what’s next. Some scenes won’t run as deep without the ability to connect to the meaning further explained in the book. Still see it, don’t over analyze; and enjoy the show!