Guess who’s back? Glee has tapped a TV veteran to play Puck’s estranged dad and it’s Thomas Calabro. The actor will debut as the senior Puckerman when the series returns this spring. Can you say drama? 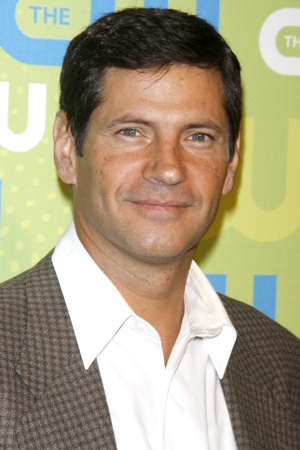 It’s time for more father-son bonding on the set of Glee. The comedy’s resident bad boy Noah ‘Puck’ Puckerman is about to get an unexpected visit from his daddy. That’s right, the man that bred the Mohawk is coming.

According to TVLine, the powers that be have cast a primetime vet in the patriarchal role. Former Melrose Place star Thomas Calabro, will bring life to Puck’s papa.

Calabro will debut in this season’s 18th episode, which is slated to air in April. In terms of looks, he and Puck portayer Mark Salling do share some physical characteristics. The dark hair, the olive skin and most importantly, the brooding eyes. It can work!

This won’t be the first time viewers have met one of Puck’s parents. In season one, we were introduced to his mom, who was played by Gina Hecht.

If you were lucky enough to remember ’90s television, you’re aware of Calabro’s previous gig on Fox. He was the only actor to appear on all seven seasons of Melrose Place, which ran from 1992-1999. He played the devious and adulterous Dr. Michael Mancini.

Michael caused a lot of trouble during his reign. Who can forget his affair and manipulation of Kimberly Shaw (Marcia Cross)? She went from medical professional to psycho at the drop of a hat. She was just one of many people that got caught in his crosshairs.

With a history like that, playing an absentee father should be a piece of cake.

Glee is currently on hiatus but scheduled to return April 10.

What do you think of Glee‘s newest guest star?