Ali Landry is letting the skeletons out of the closet! Seven years after her brief marriage to Mario Lopez bit the dust she’s telling the world how she learned of his alleged cheating ways. 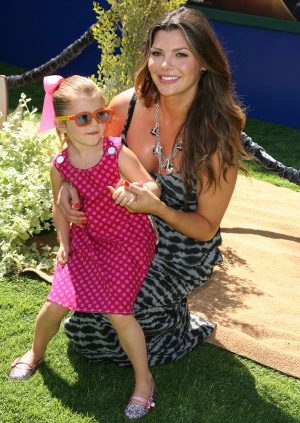 Ali Landry is making sure Mario Lopez can’t hide from his alleged cheating past. The former Miss USA stands by her accusations that he is both a cheater and a liar seven years after their split-second marriage fell apart.

Appearing on The Wendy Williams Show, Ali Landry revealed she knew something was up in 2004 even before she vowed to love, honor and cherish Mario Lopez forevermore.

“I had heard something right before the wedding: He swore that it was not true, but I had that feeling in my gut,” the 38-year-old shared. “All of my family was flying in, it was a destination wedding, and I really should have put the brakes on it at that point, but I was afraid.”

After the honeymoon ended a friend of Ali Landry’s suggested the newlywed resort to a few spy tactics to uncover the truth about her new husband.

“I was like, ‘I don’t want to tap a phone! I can’t believe I’m doing this.’ So she did, and right after the honeymoon I started getting phone calls from these girls,” Landry, now the mother of two, told Williams. “I confronted him and he still to this day, he denied it and never apologized: It was horrible.”

Adding that Mario Lopez’s claims he is friends with all of his exes is “a lie,” Ali Landry insisted the decision to drag the relationship skeletons out of the closet is for the good of setting a positive example for scorned women everywhere.

“I was so side-swiped by the whole thing, I read the Bible everyday… I never really got angry,” said Landry, who’s now happily married to director Alejandro Monteverde. “I discovered a lot about myself and I’m a better woman because of it.”