Actor George Clooney was busted by cops early Friday for protesting outside of the Sudanese embassy. Find out how he reacted while being led away in cuffs. 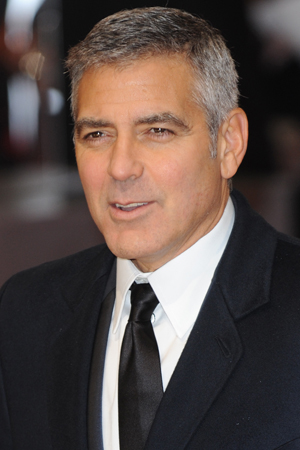 George Clooney and his pals, including father Nick Clooney, were warned they’d be arrested if they carried out their plans to protest at the Sudan embassy in Washington D.C. on Friday. Did they care? Nope — the humanitarian activists descended on the building early Friday and were promptly arrested, according to the Associated Press.

The Descendants actor has been in Washington D.C. for much of the week, meeting with leaders — including President Barack Obama — about the extreme poverty and violent massacres happening in the African horn nation. He points to Sudan leader President Omar Hassan Ahmad Al-Bashir as the main cause of the desolate situation.

In a press conference on Thursday, Clooney revealed that his meeting with President Obama was productive and he hopes to get China involved.

“There is a great interest in working with China, not in any adversarial relationship, but actually working together for their own economic interests since China is losing a considerable amount of money in oil revenue right now,” Clooney told reporters outside the White House. “So there seem to be a unique moment and a unique time to be able to act on some of that.”

Why China? The country gets much of its oil from the area.

“China who gets six percent of its oil imported from the Sudan, suddenly this affects their economy,” Clooney said. “It affects our economy in terms of oil because if China isn’t getting six percent of oil from the Sudan, they’re back on the market with us, which raises the price of gas for us. So for a moment, there is a moment that we can appeal to China.”

Celebrities targeted by the KONY 2012 campaign >>

The actor just returned from a trip to Sudan last week, telling NBC’s Ann Curry that his camp was threatened with violence.

“We showed up in one village and there was — 150 people had come out and were cheering for us to come,” he said. “Clearly somebody had told them that we were coming… And then all of a sudden everyone just started running.”

Clooney also revealed that more than 1,000 people have been killed within the past month. “The same three guys… who were charged for war crimes in Darfur are the exact same people bombing innocent people.”

“This is ethnic cleansing,” he said. “That simple.”

“Right now what is going on in the Sudan changes the cost of your gas every single day of your life,” he said. “If for no other reason than your economic interests, there is plenty of reason to make sure that your government is involved in trying to secure some form of peace.”

Say what you want about celebrity activists, at least Clooney is putting his own butt on the line. Now, we’re waiting for the mug shot.