Ali Landry was married to Mario Lopez for just two weeks before their abrupt annulment. Now she spills how she found out he was cheating — and how it led her to her true love. 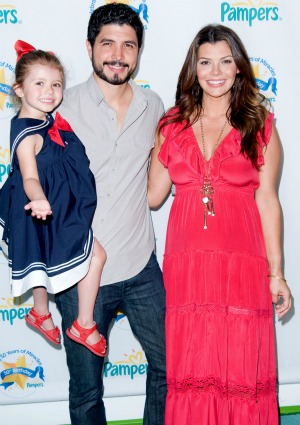 Mario Lopez‘s rep for being a dog was sealed when his then-wife Ali Landry left him after just two weeks of marriage, after she found out he was a big fat cheater. But how exactly did she find out?

For the first time, Landry revealed the whole story of her heartbreak to Wendy Williams — and she explained how the whole crappy experience led her to the happiness she has today.

“I had heard something right before the wedding. [Mario] swore that it was not true, but I had that feeling in my gut,” Landry explains.

“All of my family was flying in — it was a destination wedding — and I really should have put the brakes on it at that point, but I was afraid.”

Landry says she confided her fears to a friend who convinced her to let her tap Lopez’s phone — and soon the jig was up.

“I was like, ‘I don’t want to tap a phone! I can’t believe I’m doing this.’ [But] she did, and right after the honeymoon I started getting phone calls from these girls,” Landry reveals.

“I confronted him and he still — to this day — denied it and never apologized. It was horrible.”

“I was so side-swiped by the whole thing … I never really got angry. I discovered a lot about myself and I’m a better woman because of it,” she says.

How so? Well, besides not being married to a lying cheat anymore, her time healing through spirituality led her straight to her current husband, Alejandro Monteverde — not that she wasn’t extra-cautious there.

“I met my husband at a theology class in L.A. — who knew? He was the person I was meant to be with,” Landry says. “Because of the situation I was in before, I was just treading lightly and did not want to make any mistakes in this relationship.

“We abstained from having sex until we got married.”

Her plan worked out. The couple wed in 2006 and now have two children, 4-year-old Estela and 5-month-old Marcelo.

As for Lopez, the Extra host is engaged to Broadway dancer Courtney Laine Mazza, with whom he has an 18-month-old daughter.