Road rage is so 2011. Russell Brand’s phone rage on the other hand, which led to his arrest Thursday, is where the news is now. 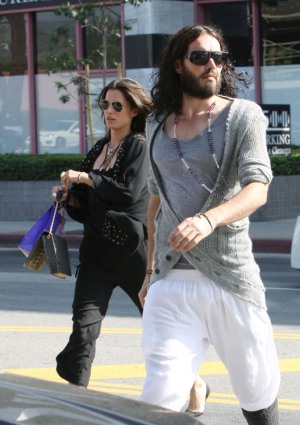 Russell Brand’s phone-flinging fun has landed him under arrest. The actor let his temper get the best of him while in New Orleans on Monday, and now must pay the price.

The trouble began early this week when Russell Brand got frustrated with a photographer. Rather than put up a middle finger to the camera lens as many famous not-so-friendly faces have been known to do, the 36-year-old snatched the pap’s phone — and threw it through a window.

On Wednesday the soon-to-be ex-husband of singer Katy Perry addressed the incident in true comedic style via Twitter. “Since Steve Jobs died I cannot bear to see anyone use an iPhone irreverently,” wrote Brand. “What I did was a tribute to his memory.”

Not laughing at the thievery-and-destruction-of-property tribute to Apple’s late CEO? The police.

Despite an offer to pay for the property and damages, a warrant was issued for Russell Brand’s arrest. Apparently now thinking with a cooler head, the phone flinger opted to turn himself into police custody Thursday.

As of late Russell Brand just can’t seem to catch a break. Aside from his pending divorce from Katy Perry, the actor is pictured here on Feb. 26 with reported new girlfriend, Mexican artist Oriela Medellin Amieiro, walking back to his black Range Rover — complete with hefty ticket for parking in a fire zone in West Hollywood.