Finally, Katie Couric’s daytime talk show has an official premiere date — and ABC is working hard to make sure that Katie is worth the wait. 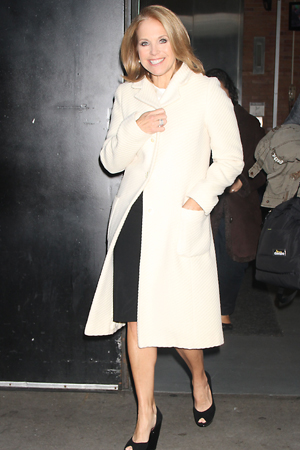 Mark your calendars and set your DVRs — Katie Couric’s brand new talk show Katie will premiere on Monday, Sept. 10 at 3 p.m. EST on ABC, according to The Hollywood Reporter.

With the clock officially ticking, the ABC daytime show is revving up for what the network hopes will be a successful launch. With a new logo — simply the word “Katie” against a swirl design and free of Couric’s headshot — and a few new staff additions, could Katie be the next Oprah for ABC?

Possibly, as the former Today Show host and CBS News anchor will be directed by Joe Terry, who has spent the past 14 years directing The Oprah Winfrey Show. In addition, Katie has also added Kathy Samuels as co-executive producer. Samuels’ past work includes Access Hollywood and the launch of Rachael Ray.

Disney/ABC Television Group president Anne Sweeney offered a glimpse of Katie back in June, via The Hollywood Reporter.

“It will be serious at times, obviously informative and fun. Really, a mixture of things we hope people will be interested in,” she explained. “It’s not going to be a news show, but we’ll be talking about the news and issues that I think people care about, whether it’s bullying or the effect technology has on our kids. It might be a profile of a navy seal after Osama Bin Laden has been killed; it might talk about women in the military and some of the stresses they experience in re-entry with their families.”