Parents should never, ever lie to their kids… right? Actress and mom-trepreneur of The Honest Company says otherwise, and why. 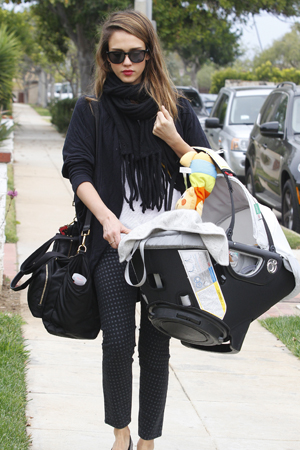 Every mom has their unique parenting techniques that they think are the best ways to help their children make their way in the world: Nicole Richie hides her family’s fashion fame from her kids, Katherine Heigl vows to keep her daughter from Dance Moms and Snooki wants Pauly D to welcome her baby into the world by deejaying in the delivery room!

But Jessica Alba shared part of her parenting style in the April issue of Parenting, complete with a couple crucial white lies to help her children grow up in a new definition of normalcy.

“When the paparazzi follow us, and she asks me what they’re doing, I tell her ‘They’re just taking pictures. Isn’t that silly?'” she said. “I don’t want her to have anxiety, so I tell her they do that to everyone, not just our family.”

She also fibs a little to keep her children healthy. “I serve Honor flavored sparkling water—she thinks that it’s soda, and that’s what I let her think,” she explained. “I told her that ‘brown soda’ is only for adults, and she believes me. Ha!”

Alba also expressed that she’s given up the fight against any distasteful media. “You’d think that the best way to protect my family from the lies and criticisms the press can print about me would be to angrily deny them at every turn. But I’ve found out it’s better to do nothing, as long as it doesn’t deeply affect my family and their happiness,” she reflected.

She’s found a way to stop the vicious circle that so many celebrities find themselves caught in. “Whether it’s true or false, I won’t say anything. I think that’s just feeding into it, and it’s going to create more press than it needs to. My mom’s like, ‘It’s not true! That’s an outright lie!’ And I tell her, ‘Yeah, but if I come out and say that’s an outright lie, then it’s going to be circulated again.'”

She says it’s just not worth it anymore, especially due to her shift in life priorities.

“Before I had kids, I was always so focused on my career, and it was always such a big thing for me. But once I had kids, it changed. That’s probably the thing that’s surprised me the most about motherhood –just how secondary everything else is. Nothing else really matters to me aside from my children and their well-being.”