Country superstar Faith Hill is one of the most gorgeous women in the world, thanks to her style and makeup pros. Does she still turn heads without a drop of makeup? You be the judge. 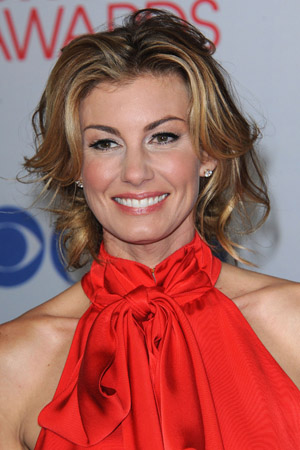 Hill’s down day was Monday at LAX. The couple — along with children Gracie, 14, Maggie, 13 and Audrey, 10 — was spotted boarding a flight to Sydney, Australia and Hill was without a drop of makeup. Some women look the same whether they wear makeup or not, but Hill was almost unrecognizable.

Not that it matters to Hill — the sometimes actress prefers simple style over constant glam.

“I feel the sexiest and strongest in slacks or feminine dresses. Nothing too fussy,” she told Allure magazine in February. “I use Rosa Graf, Neutrogena and I mix Johnson’s Baby Oil with lotion and put it on right after I get out of the shower when my skin is still damp so it soaks in.”

Her hairstylist also caves to his client’s wishes, putting her naturally curly hair in simple styles whenever possible.

Hill even went for a short crop back in 2001, much to the dismay of her big-hair-loving country counterparts. “It was carefree,” he added of the short crop. “You could really see her amazing bones.”

We think it’s a great attitude to have, especially with three pre-teen daughters. The only thing we’d change? Her hair! This author has the same type of unruly curls and sometimes it’s just better to put it up in a simple pony rather than deal with it.

Then again, we doubt she was thinking about her hair before a 17-plus hour flight across the world.

Tell us: Is Faith Hill better with makeup, or without?