Kate Middleton made some Olympic dreams come true today when she dropped by to meet the Great Britain women’s hockey squad. 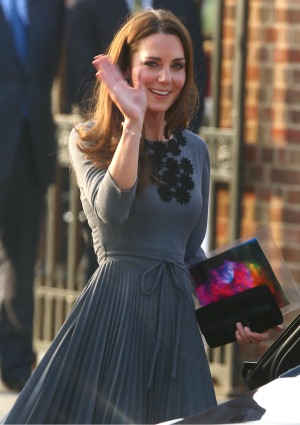 How does one keep busy while one’s royal husband is deployed? Hockey of course! Kate Middleton made a visit to the Great Britain women’s hockey team (that would be field hockey to those of us on the other side of the pond) to whip her stick around and spread some good will.

“We are delighted that the Duchess has asked to visit us. It’s a real boost to morale and has caused a real buzz within the squad,” said team performance director David Faulkner.

Turns out the Duchess of Cambridge used to wield the stick quite handily herself as captain of the first 11 at Marlborough College.

“I used to play at school and I remember my muscles at the beginning of the season were agony,” Kate told the players.

“Do you still get bananas and oranges at half time? I don’t know if that was purely a school thing? I was striker so you had to get the timing exactly right, well that was the idea.”

“I played on the left wing. I really enjoyed it and it is great to be here. I haven’t played since I stopped so I am really nervous now.”

Why the attack of nerves? The team handed her a stick and stuck her in the midst of their practice! Sporting a super cute pair of pink ankle-length skinny jeans and a team hoodie, Kate was embarrassed but game for the experience.

“I was really looking forward to coming here but now I am here and have discovered I have to play!” she said. “I am not feeling so confident. The last time I played was 2005, maybe. It feels like I haven’t held a stick for ten years. This is going to be so embarrassing. My brain thinks I can do all these wonderful things but my body just doesn’t play ball.”

“Oh please don’t tell me I have to do it in front of all these people,” she laughed. “I don’t want anyone to watch!”

Ever the good sport, Kate didn’t give up and kept going until she hit a ball straight into the net.

The Duchess soon had to boogie on her way, but not without expressing her appreciation to the team for such a fun morning.

“Thank you so much! It has been a great experience. Nerve wracking but great. I really miss playing,” she said. “I really hoped to be here, I would love to see you play in the games. Now I have seen the set up and got to see behind the scenes it would be really exciting to come back and see everyone in action. Good luck with everything.”

Kate then changed into a lovely gray Orla Kiely dress to join her father-in-law Prince Charles and his wife Camilla, Duchess of Cornwall, on a visit to the Dulwich Picture Gallery.