Love Ashton Kutcher’s new shaved and shorn look? The Two and a Half Men star says there’s a bit of divine intervention to thank! 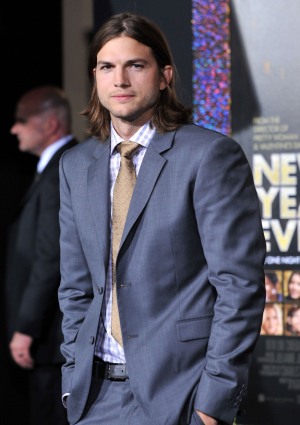 Ashton Kutcher’s long hair is no more! After years of rocking facial scruff and long locks the actor is clean-cut yet again.

Ashton Kutcher explained his new look while talking with the press at a PaleyFest panel in Los Angeles on Monday, joking, “Jesus wanted [his look] back so I gave it to him.”

Humor aside, the new short hair and clean-shaven face is actually by request of the Two and a Half Men writers. It seems character Walden Schmidt’s transformation, who Ashton Kutcher began playing after Charlie Sheen’s dramatic departure from the show, means the actor gets a real life makeover as well.

“We wanted to tell a story about being in a relationship and being pressured to change,” show creator Chuck Lorre said of Walden’s budding relationship with Zoey, played by Sophie Winkleman. “Walden pushed back and said, ‘You can’t change me. This is who I am.’ But once she stopped trying he got a haircut and changed.”

Still, Ashton Kutcher isn’t exactly thrilled with being forced to clean up. “I actually was enjoying looking homeless,” People reports he joked.

Not one to be left out of the humor, Two and a Half Men costar Jon Cryer chimed in, “People just gave him quarters.”

“I’m sure there will be people now that I’ve cut my hair and shaved my beard that want me to have long hair and a beard,” 34-year-old Kutcher commented of not being able to please all the people all the time in January. “And there were people that when I had a beard and long hair that wanted me to be shaved and have a haircut.”

Do you prefer Ashton Kutcher’s clean-shaven or homeless look?