Bring in the clowns! Or according to Modern Family, “Send Out the Clowns.” This week, the comedy delved into Cam’s entertainment background, Phil’s real estate woes and Manny’s new friendship. Plus, two familiar faces stop by for guest appearances. 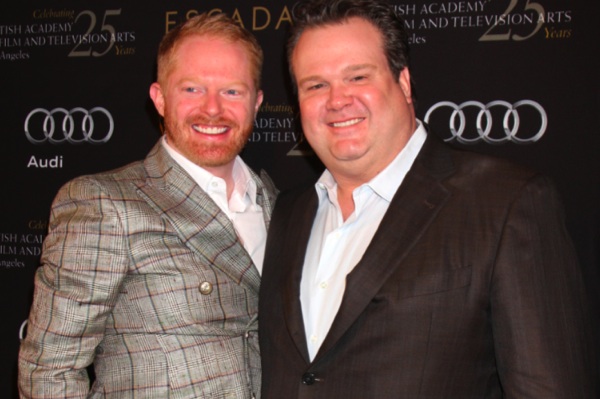 Fizbo and Lewis together again

Following the death of his mentor Professor Ringmaster, Cam’s (Eric Stonestreet) reunited with his old clown partner Lewis (guest star Bobby Cannavale). They haven’t seen each other in years, and aren’t on the best terms. Apparently, Cam disbanded their group, which he likened to The Beatles. According to him, “It’s hard to have a relationship and a clown career. That’s the reason there are so many single clowns.” Is it Cam? Is it?

A Nightmare on Ellen Street

Cam wasn’t the only one with problems this week. Phil (Ty Burrell) had his hands full with ruthless realtor Mitzi Roth (guest star Ellen Barkin), an agent who’s known for stealing properties. Phil says, “We call her the nightmare on Elm Street… because she sold a lot of houses on Elm Street. “

Manny and the cool kid

Manny (Rico Rodriguez) befriends one of the most popular kids in his class, Griffin Cooper. Jay’s (Ed O’Neill) confused by their relationship considering Manny’s eccentric ways. He’s convinced the only reason Griffin hangs out with Manny is because of him. But he couldn’t be more wrong. Griffin’s less interested in Jay and more interested in Gloria’s (Sofia Vergara) lady lumps.

After getting screwed over at work, Phil decides to sink to Mitzi’s level. He takes Luke’s (Nolan Gould) spy pen and tries to record her confessing her evil deeds. Unfortunately, she catches on to his plan and destroys the evidence. But Phil has another ace up his sleeve. Later on, he uses Luke to make her feel bad about stealing from him. Mitzi falls for Luke’s crocodile tears, and returns the property.

Why won’t you friend me?

Claire (Julie Bowen) joins Facebook and wants to be friends with Haley (Sarah Hyland) and Alex (Ariel Winter). As expected, the girls don’t want their mom knowing the ins and outs of their social life. They pretend as if her requests aren’t coming through, but it doesn’t work. Eventually, she’s gets hip to their lies and forces them to become buddies.

You can catch Modern Family Wednesdays at 9 p.m. ET/PT on ABC.

What was your favorite moment from last night’s Modern Family?