Leah Remini and Sharon Osbourne are at each other’s throats over cast changes at The Talk. Who’s telling the truth? 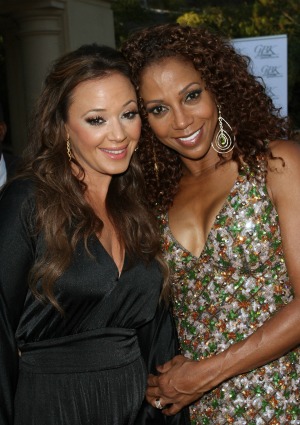 When Leah Remini and Holly Robinson Peete were fired from The Talk back in August, both actresses said they had no idea what happened. Now Remini is taking former co-star Sharon Osbourne to task for having the pair fired, all over an interview with Howard Stern a few months ago.

When a fan asked Remini about the sitch on Twitter, she responded with her take.

“Sharon thought me and Holly were ghetto,” she wrote. “We were not funny, awkward and didn’t know ourselves. She has the power that was given to her.”

The message set off a firestorm, not just among fans but between the two foes. It has gotten so bad in only two days that Sharon Osbourne took it upon herself to issue a statement.

“In response to Leah Remini’s continuous comments that I had her fired from The Talk, let me just go on the record to say I had absolutely nothing to do with her departure from the show and have no idea why she continues to take to Twitter to spread this false gossip,” Osbourne tweeted yesterday.

“Leah knows that I have never been in the position to hire or fire anyone on the show,” she continued. “That being said, my only wish is that Leah would just stop all this negative, unprofessional and childish behavior. It’s been seven months… it’s time to move on. Leah is a very talented actress and I only wish her happiness and success.”

Yap it up! The Talk renewed for season three >>

“I know that better things are to come if she can just get beyond all this negativity.”

The problem is that apparently Osbourne said it herself in an interview with Howard Stern, a point that Remini was quick to point out.

“I answered a question on Twitter from fan who wanted to know what happened AGAIN… I answered from the information that was given in an interview from Howard Stern,” she wrote. “This is what happens when ppl dont get HONEST answers.”

“If someone wants me to stop, they should call a lawyer and tell them what i am NOT telling the truth abt. we can go from there.”

“No one is perfect, including me. This is a waste of time. I will not respond to Sharon BUT only to say this, IF she wanted to clear it up she has my number & has had ALL this time and didn’t use it. not even to say she was sorry. so to Sharon I say… Well done Sharon, you won. I will move on now as you suggested. And so should u. Be at Peace.”