Can Courtney Robertson make the ABC reality competition jump from The Bachelor to Dancing with the Stars? The newly engaged winner is in talks to appear. 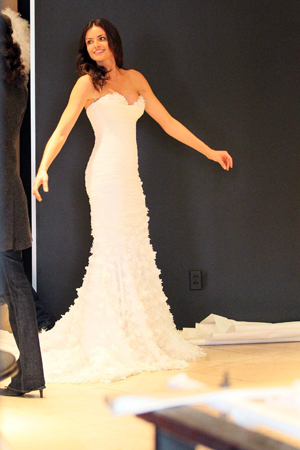 Making it all the way to the final rose and walking away with an engagement ring may be fierce competition, but does The Bachelor winner Courtney Robertson have what it takes to go all the way on Dancing with the Stars?

According to People, sources have confirmed that the newly engaged Ford model is currently in talks with Dancing with the Stars producers regarding a possible appearance on the March 19 season premiere.

When asked about the rumor, a DWTS representative said simply, “We do not comment on casting rumors. You’ll have to tune in Monday and see.”

No word yet on whether Ben Flajnik’s new fiancee will just be coming along to usher in the new season that features singer Gavin Degraw and The View’s Sherri Shepherd, or if she’ll be joining the cast and competing as well. It wouldn’t be the first time that ABC adds another contender at the last minute, as former Bachelor contestant Melissa Rycroft replaced an injured Nancy O’Dell back in season eight.

Even more so, Robertson would only have five days to rehearse a number for the season premiere — and that’s if those talks come to an agreement at some point today!

Would Courtney Robertson be too much drama for the other contestants to handle, just like she was on The Bachelor?

Read more headlines from The Bachelor

No sloppy The Bachelor seconds for Barbara Walters
Lindzi Cox happy she wasn’t the chosen one
Has Ben Flajnik already cheated? Looks like it