The folks at CBS must be in a good mood. The network has renewed the majority of their primetime slate for another season. The Good Wife, Person of Interest and 2 Broke Girls are just a few that made the cut. Find out if your favorite series got a new lease on life. 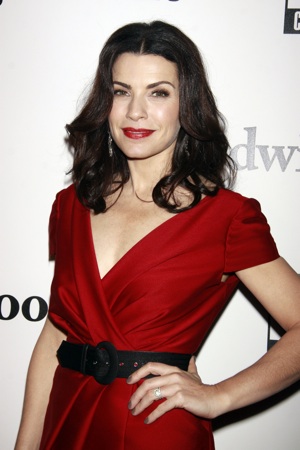 Oh, happy day! CBS has revealed that 15 of their current shows are returning this fall. One of the lucky survivors is the critically acclaimed drama, The Good Wife.

Fans of the Julianna Margulies series were worried about its fate due to its modest ratings. But they can breathe a sigh of relief. The storm is over — for now. Alicia Florrick will live to see another season.

Prior to this announcement, CBS had already renewed How I Met Your Mother, The Big Bang Theory and Survivor. That brings their primetime total to 18.

According to TVLine, veteran series CSI:NY and CSI: Miami have yet to be renewed. Also the freshman dramas A Gifted Man and Unforgettable are noticeably absent from the list.

In terms of comedy, the midseason replacement Rob and Rules of Engagement are both in limbo. And the biggest shock of all is the powerhouse Two and a Half Men. CBS and Warner Bros. Television are still negotiating the show’s future, including the return of current headliner Ashton Kutcher.

Here’s a list of the latest CBS returns. Find out if your favorite made the cut:

Is your fave set to return? Are you shocked by the list?