Season 5 of Mad Men means new things for Jon Hamm — beyond Don Draper’s secretary-turned-fiancée, that is. 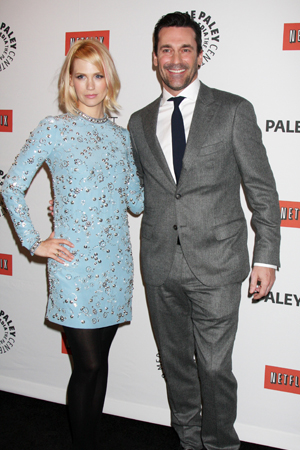 Jon Hamm isn’t just celebrating Mad Men‘s return to television after an elongated hiatus. He is also excited to don a few new prominent roles on the show. The man who plays Don Draper has signed on as a producer and will make his directorial debut sometime after the Season 5 premiere.

“Being a producer on television, there are a lot of them,” he admitted to The Hollywood Reporter, “and there are certainly a lot of pay grades above my title, but it was nice that they extended it to me and I do feel like I’ve earned it. I’ve been on the set for quite some time, and five years in, it was nice to get that respect.”

Hamm also reflected that directing has been one of the most special experiences he’s had on Mad Men thus far.

“It was a blast,” he said. “It was the first one we shot, but it won’t be the first one we air… It was fun because we had such a long layoff. It was nice to come back and have everybody excited and reinvigorated and really just happy to be back at work. That part felt like an extra special pleasure.”

“If you’re referring to the Kardashian thing, then that’s its own animal,” he said. “We live in a world now where every word is micro-parsed and sometimes taken out of context, sometimes misunderstood. But also, there’s a lot of outlets now. Everyone has a blog or a cable news show or an online presence or something. There’s a lot of outlets and those outlets need to be continually fed.”