A club manager claims Lindsay Lohan ran him over in a parking lot last night, then fled the scene. Is the star in trouble yet again, or is the whole thing being blown out of proportion in a bid for cash? 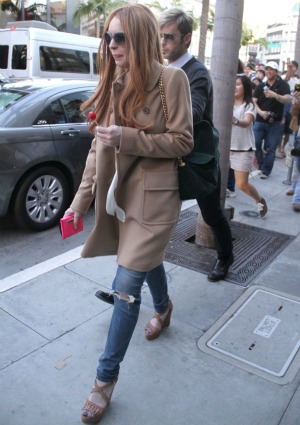 Another day, another scandal for Lindsay Lohan. This time a club manager is accusing her of hit and run, claiming she ran him over in a parking lot then fled the scene.

Here’s how it went down: Lohan was leaving The Sayers Club in Los Angeles just after midnight and was being mobbed by paparazzi in her Porsche. When she attempted to pull out of the parking lot, a crowd from the nearby Hookah Lounge surrounded her and she lightly struck the manager, according to TMZ.

Police were called to the scene, who interviewed the manager and people inside the club, then left after determining that no one was injured. In fact, the guy told both paparazzi and police that he was only lightly grazed on the knee and did not need medical attention — and if the bump was that light it is likely that Lohan didn’t even know it happened.

However, now that the reality of a potential payday has sunk in, the manager decided to head to the emergency room, press charges and hire a lawyer. Cops said they will only open an investigation if the manager files a report, because from what they saw at the scene nothing criminal happened.

And that is exactly what Lohan maintains. She defended herself on Twitter earlier today, writing, “Scrape? This is all a complete lie. I’ve been at community service. Last night, I attempted to wish a friend happy birthday, which I didn’t even get to do because I was freaked out by all of the paparazzi.”

“This is all a complete lie… These false accusations are absurd.”

Lindsay Lohan in More Trouble?!
Looks like Lindsay Lohan might be in trouble with the law again, this time for a hit and run!

Tell us: Do you believe Lindsay Lohan or the club manager?