It’s been 25 years since we were first introduced to 21 Jump Street. The cop drama was a breakout hit that featured a young Johnny Depp and Holly Robinson Peete. The actress, who also appears in the remake, has given the film version her stamp of approval. 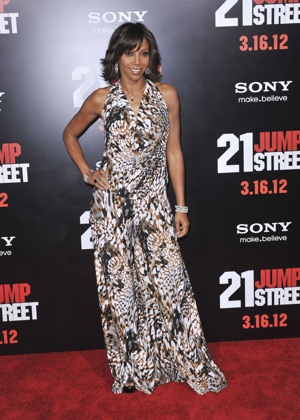 Will you be heading to 21 Jump Street? The big screen adaptation of the TV series debuts in theaters Friday and stars Channing Tatum and Jonah Hill.

The film centers on two young cops that go undercover at a high school to bust a drug ring. It takes a few notes from the show, which ran from 1987-1991.

Depp left the show after the fourth season, while Peete stayed on the entire run. Her allegiance to 21 Jump Street knows no bounds. That’s why she was more than happy to reprise her role for the remake.

According to Zap2it, Peete’s given the new 21 Jump Street her blessing.

“I like Jonah and Channing, I really do,” says Peete. “I think they’re going to do it justice. When I went in to film my cameo, I was amazed at their comedic timing. I felt they could maintain the integrity of the program. But you know, in the end, it’s a comedy; it’s about making people laugh.”

If you look closely, you can catch Peete’s cameo in the 21 Jump Street trailer. She’s the one that introduces Tatum and Hill’s characters to the famous program.

Peete’s come a long way from her days as an undercover cop. After 21 Jump Street was canceled, she moved on to the ’90s sitcoms Hangin’ with Mr. Cooper and For Your Love.

Most recently she appeared on CBS’ The Talk and the hit comedy, Mike & Molly.