James Van Der Beek had a baby! Or, actually, his wife did. Flustered and overjoyed only begin to describe the former Dawson’s Creek star’s celebratory tweets. 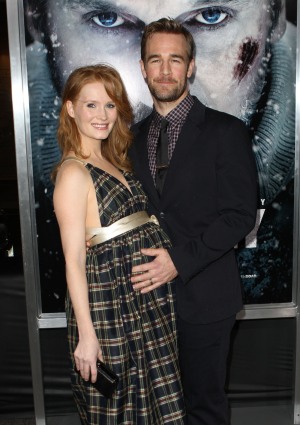 It’s a boy for Kimberly and James Van Der Beek! The pair welcomed their second child together on Tuesday, with the proud father doing the honors of sharing the happy news via Twitter.

“Had my first son this morning,” James Van Der Beek tweeted, then corrected. “Well, actually, my wife had him. I just caught him. Wow. Heart expanding way faster than my brain…”

The 35-year-old, once known as creek-dwelling Dawson Leery to hopeless romantics, went on to write, “If you could bottle up and distribute this feeling, I swear there’d be no more war. #fatherhood.”

Further details, including the Van Der Beek’s baby name pick, have yet to be released. The couple announced Kimberly’s pregnancy in October.

The little guy joins big sister Olivia, now 17 months old. James wed Kimberly on Aug. 1, 2010, just under two months before the arrival of their first child. This is the second marriage for the actor, who spent six years as spouse to actress Heather McComb.

Based on James Van Der Beek’s tweets, the birth of his first son was no less dramatic than Olivia’s arrival. The actor shared previously of his daughter’s birth, “It’s not easy to watch the person you love go through that. At one point in the middle, I had to excuse myself and secretly take 20 seconds in the bathroom to break down, wipe my eyes, beat my chest and man up for her. There’s a reason they don’t let men give birth.”