Barbara Walters will not be lining up for a chance at love with The Bachelor Ben, should happily ever after not work out with Courtney. What would she want with an ordinary guy with bad hair? 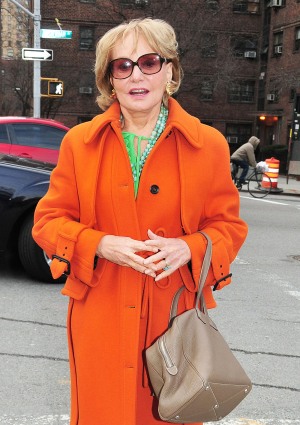 Barbara Walters is calling The Bachelor as she sees it — and it ain’t pretty. The seasoned journalist not only thinks the show is “degrading” to women, but Ben Flajnik in particular is nothing to write home about.

Venting her views about ABC’s The Bachelor Barbara Walters said on The View (which also airs on ABC, mind you) Tuesday, “I lost an hour of the rest of my life, watching the [finale] of The Bachelor. I did it knowing we were going to talk today. Say whatever you want… I’m deeply offended.”

Pointing out the show’s 100 percent failure rate at matchmaking, much to the delight of the audience, Barbara began, “First of all, The Bachelor has been on for 10 years, not a single Bachelor has married the woman he chose in the finale.”

“I love ABC, I’m very happily employed… but I think this show is such a degradation to women!”

Summarizing the rundown of Bachelor Ben’s experience the 82-year-old said, “So Courtney, the women he finally decides to marry, I knew she was gonna be the one because they gave her the most airtime. So she sits down and says, ‘I’ve never trusted before, I really love you, I want to have children with you.’… And what does he say? Quote: ‘Really nice.'”

Exasperated by his lack of enthusiasm, Barbara Walters closed her The Bachelor rant with an outright jab at Ben Flajnik. “Here are these women saying, ‘I love you so’… And then he turns them down,” she vented. “And he’s an ordinary guy with bad hair. Why?!”

Safe to say Barbara Walters won’t be vying for Ben’s affection should his and Courtney’s engagement bite the dust per The Bachelor tradition!

Do you agree with Barbara Walters’ view of The Bachelor?