A major mystery was solved on last night’s episode of The River, as Dr. Emmet Cole was reunited with his wife and son. But our heroes found themselves with no time to celebrate and nowhere to run. 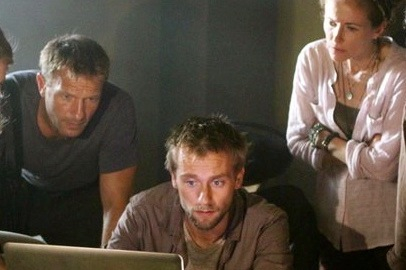 Since its premiere last month, The River has centered on the search for missing naturalist Dr. Emmet Cole. Last night’s episode finally brought an end to that mission and marked the introduction of an even more pressing objective: Evade zombies!

Yes, fans of The Walking Dead no doubt sensed something familiar during this week’s claustrophobic installment of The River, as Dr. Cole’s estranged wife Tess, frequently irritated son Lincoln, and enigmatic ex-producer Clark led their team through the dimly-lit research outpost where we had left them all puzzled last week.

The outpost, Tess and company soon discovered, had once been home to some disastrous medical experimentation (is there any other kind?) that resulted in the creation of hungry, ratchety-breathing zombies (is there any other kind?). Because zombies clearly don’t take kindly to strangers crashing their jungle pad, our heroes found themselves caught up a camera-jiggling chase that offered audiences a fleeting sense of nausea.

Thanks to last night’s episode (aptly titled, “The Experiment”), we learned, through flashbacks, that a team of scientists once used this creepy outpost to perform autopsies on members of the Xulos tribe. But it was all for a good cause, you see: The people of Xulos, scientists had determined, benefited from a unique genetic makeup that would lead to a cure for cancer! That’s cool, right?

Well, apparently not everybody thought so. Because just as the cure was discovered, Captain Kurt’s fiancée (who was working at the outpost at the time) shot up the infirmary and exposed everybody in the vicinity to a creepy, fast-acting virus — specifically, the kind of virus that creates zombies.

That backstory helped set the stage for last night’s adventure, as our heroes struggled to stay one step ahead of mindless eating machines while navigating an episode that offered numerous ups and downs. Good news: Rabbit (the missing camerawoman) was discovered to be alive and well. Bad news: She was devoured by a zombie shortly thereafter.

And then there was Dr. Cole himself, discovered near the end of the episode in a self-made cocoon (of magical dragonfly silk, or something) that enabled him to conserve energy and stay protected from zombie chaos until his rescue. If this all sounds absurd, you’re probably new to The River.

Perhaps in an attempt to prove he doesn’t always need rescuing, Dr. Cole concluded the hour by emerging from his cocoon just in time to save Clark from becoming zombie food. The rejuvenated doctor even got to toss off a glib one-liner like a pro. What daring acts of heroism can we expect from Dr. Cole in next week’s grand finale?