Gillian Anderson revealed that she once had a lesbian relationship — but let’s not make a big deal out of it, okay? 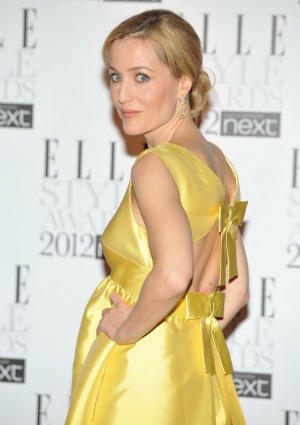 Guess who got it on with a girl? Former ’90s sci-fi superstar Gillian Anderson has always been pretty open about her wild child ways, but this revelation is a new one: The X-Files star says she had a girlfriend.

The actress made the admission during an interview with Out. Talking about how she was voted “Most Bizarre” and “Most Likely to Be Arrested” in high school, Anderson said the nominations weren’t surprising “based on how I chose to look, dress, behave, you know — the relationships I was in at the time were freaking people out.”

“You know, I’m old enough that I can talk about that,” she said. “And then I was in a relationship with somebody who was way, way older than me. Everything that that kind of anarchistic attitude brings — the inappropriate behavior it leads to — was how I chose to be in the world at that time, which was, you know, not what people did.”

“If I had thought I was 100 percent gay, would it have been a different experience for me?” she wondered. “Would it have been a bigger deal if shame had been attached to it and all those things that become huge life-altering issues for youngsters in that situation? It’s possible that my attitude around it came, on some level, from knowing that I still liked boys.”

Anderson’s love of ladies didn’t stick. She has been married to two different men — The X-Files assistant art director Clyde Klotz and documentary filmmaker Julian Ozanne — and has two sons with partner Mark Griffiths, in addition to her daughter with Klotz.

Read the entire interview with Gillian Anderson on Out.com.