Another day, another Hollywood breakup — and another cheating scandal. Is Peter Facinelli’s wandering eye the cause of his split from Jennie Garth? 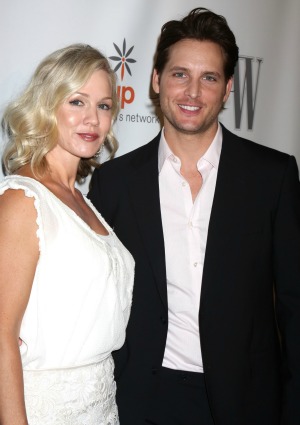 Another Hollywood marriage destroyed by cheating? Not surprising, but no less sad. This time we’re hearing that Jennie Garth split with Peter Facinelli because he was cheating — and it happened while he was filming Breaking Dawn.

A source close to the sitch told Scallywag & Vagabond that Peter Facinelli got hot and heavy with a woman he met in Vancouver while filming the last of the Twilight series.

“Peter had been seeing another woman for quite some time. They tried to make it work for the sake of their children and Jennie played housewife for as long as she could but finally had enough.”

The source said that Facinelli enjoyed a “short, torrid affair” with the woman, described as a Canadian in her late 20s, but stopped short of confirming whether or not the two are still an item. “No comment.”

Jennie Garth and Facinelli announced their split Tuesday after 11 years of marriage.

“While we have decided to end our marriage, we both share the same deep love and devotion to our children. We remain dedicated to raising our beautiful daughters together. We ask for privacy and respect during this time,” the couple said in a statement.

The pair met in 1996 — the same year Garth divorced her first husband Daniel B. Clark — and have three daughters together: Luca, 14, Lola, 9 and Fiona, 5.

Reps for the two have not commented on the rumors of an affair.

Read on for more Peter Facinelli