She may not have been the chosen one on The Bachelor, but Lindzi Cox isn’t crying in her rose-scented bath tonight. 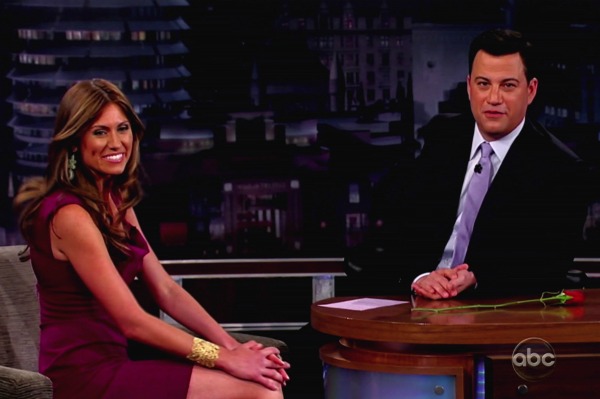 Lindzi Cox seems awfully cheery for someone who just got the ultimate rejection on national television. In TV interviews aired since The Bachelor finale where Ben Flajnik chose Courtney Robertson instead of her, Cox said it’s all good in the ‘hood — and gets in a dig or two along the way.

In an appearance on Jimmy Kimmel Live, Cox said after the romance of the moment faded she knew it was for the best.

The Bachelor: 10 Moments when I was totes like WTF? >>

“I think in the moment, obviously, you’re like getting off this helicopter in Switzerland and you’re maybe going to get engaged to or maybe you’re going to get dumped and you have no idea,” she told Kimmel.

“In hindsight, he made his decision, and I’m in a really good place,” she said. “I’m happy with how it ended up. I respect it.”

Cox also said there are no hard feelings between her and Courtney, despite the bad rap the winner got from some other contestants.

Where did Cox go wrong? By acting like a lady — something Courtney didn’t do. “She was naked a lot!” she told Good Morning America, getting in a nice dig. “Maybe if I skinny dipped, I wouldn’t be here with you.”

Cox also explained her parting shot to the newly engaged couple: “When this doesn’t work, call me.”

“That was a joke: I didn’t really know what to say, ’cause it was such an awkward silence,” she explained. “I thought it was funny.”

And kinda true. On After the Rose Ben admitted that he and Courtney broke up between the time the finale was taped and the show aired because he was shocked by the way his new fiancee’s behavior was portrayed on the show — but they wound up getting back together.

“The woman I saw on TV isn’t the Courtney I know, and just the little things, like the skip from the rose ceremony. I wish in those moments she would have been more gracious,” Ben said. “Those are the instances that led to Courtney and I not talking for a time while this show aired. We were essentially broken up. It became so much I just cracked. There were a few weeks there where I needed to take a step back and refresh and for me, that was the low of this experience.”

“We love each other and that’s what’s gotten us again here to this point. We know this is going to work. Everyone’s going to be a critic. The people we know support us and that’s what matters.”

Congrats to the happy couple — and to Lindzi Cox for dodging a bullet.