What’s the hardest part about being Schmidt on the hit series, New Girl? The often naked Max Greenfield dishes about hanging on to Cece. 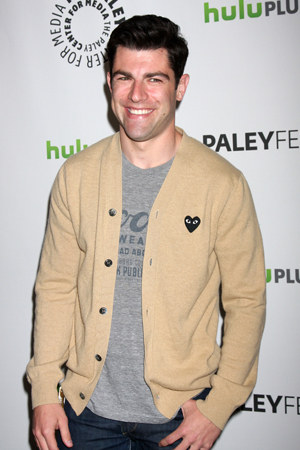 New Girl actor Max Greenfield rarely ever has his shirt on while playing Schmidt. And though his character may love the attention from his gorgeous bedroom buddy, Cece (played by Hannah Simone), Greenfield confesses that Schmidt’s constant need to be naked isn’t exactly easy for the actor and asks his fans for forgiveness as the episodes continue on.

“I’d like to stop dieting and working out for like a minute,” he told The Hollywood Reporter. “Here’s the thing. We’re on episode 21. I can’t keep this up. I’ve gone off [the regimen] like the last month I’ve just been eating, and, if you’ll notice, like you’ll see me in certain scenes hiding things in front of my lower abs. It doesn’t look like it did in episode 13.”

“I wish I knew. I wish I knew what I did in a previous life or earlier on in this one to deserve all this success with the ladies on the television show,” he said. “I don’t get it.”

He teased about what’s to come for the “couple” later on in the series. “The stuff with Cece continues. She is the best; the stuff we’re doing is fantastic and it’s a lot of fun.”

But Schmidt won’t move forward with Cece without a struggle. “How easy? Oh no, it’s not easy. Schmidt is holding on for dear life with his little fingernails just in there… he feels like he got a hook into Cece and he’s like, ‘Please, I gotta hold onto this one.'”