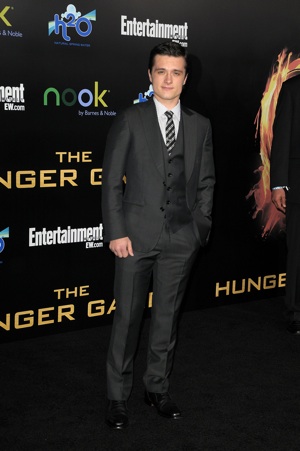 Hold on to your seats, The Hunger Games is almost here. The Gary Ross drama won’t hit theaters until next week, but we’ve got a preview clip right now.

The Hunger Games is based on the best-selling novel by author Suzanne Collins. It centers on a nation called Panem, where children are forced to participate in a survivalist competition.

Panem consists of districts, and each district chooses two tributes (a girl and a boy) to represent them in the games.

Series heroine, Katniss Everdeen (Jennifer Lawrence) and Peeta Mellark (Josh Hutcherson) are one of the unlucky pairs thrown into the deadly scenario.

When Lawrence watched The Hunger Games for the first time, she was in awe. She thought it was “really good” and believes die-hard fans will love it.

“It’s always hard for me watching because I think I am a horrible troll and I’ll never work again. Overall, I think everybody else in the movie is fantastic, and I think the film itself is really good.”

Inside look: The Hunger Games premiere >>

As promised, here’s a little taste of The Hunger Games (via MTV). In the following clip, Peeta’s taking part in a broadcast interview conducted by Caesar Flickerman (Stanley Tucci).

Watch as Flickerman gets Peeta to open up about his personal life:

Are you excited about The Hunger Games?