It’s no secret that Pauly D knows how to throw a party. The DJ is already imagining the type of baby shower he’d throw for his expecting Jersey Shore castmate — complete with pickles, of course! 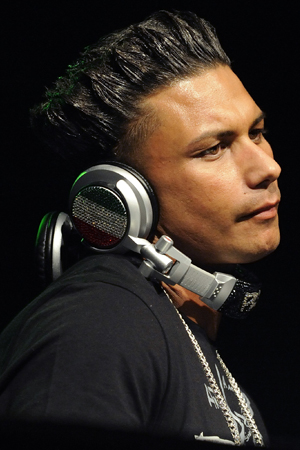 The cast of Jersey Shore has made their fame by having a good time in quite unique ways. That’s why it’s no surprise that Nicole “Snooki” Polizzi asked fellow castmate Pauly D to join her and fiance Jionni LaValle in the delivery room to spin a signature Shore soundtrack while giving birth!

“She told me she wants me to deejay the delivery room,” said Paul “Pauly D” Delvecchio to People. “I told her I’ll just deejay the baby shower.”

The DJ won’t necessarily be planning her baby shower, but he did imagine what it would be like if he actually were in charge of putting together that party.

“I would have spray tan booths in the corner, because she loves to tan, and a lot of loud music,” he said.

And what kind of refreshments would be offered for party guests? “I’d have pickles everywhere, too.”

“I think it’s ready for hair gel as soon as it comes out. If there is hair, throw some gel in there,” he says. “Too young to tan though. Don’t tan. You gotta be 18. Maybe a spray tan.”

Looks like Pauly D will be around Snooki and Jionni as they raise their baby, since he stressed his familial role when he first tweeted his congratulations to Snooki: “Congrats To My Girl @snooki So Happy For Her And Jionni!!” he wrote. ” I Better Be The Godfather 🙂 #UncleDJPaulyD”