Bobbi Kristina Brown might still talk to her deceased mother, Whitney Houston, but she won’t talk to her living father anymore. Find out how she’s allegedly removing him from her life. 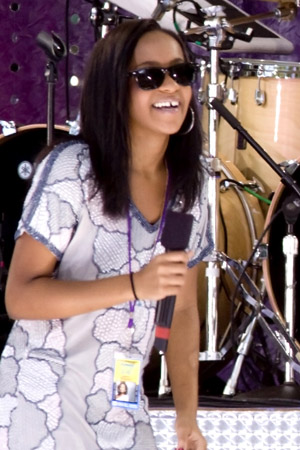 Bobbi Kristina Brown told Oprah during her OWN interview that she still talks to her mom, Whitney Houston. Now we know part of the reason why: She lost the only person she considered a parent, considering that her relationship with her father Bobby Brown is pretty much nonexistent.

How strained is the relationship? Bobbi Kristina is even considering changing her name to sever any ties with her New Edition dad, according to TMZ.

The 19-year-old reportedly wants to change her name to Kristina Houston, according to the site. Some are worried that she’s doing this in her moments of grief, but her family insists that she’s in a “sober mind” and is making the decision as an adult.

The development will likely hurt Brown more — he’s had a difficult time since his ex-wife died, including getting left out of both the funeral and her will. Instead, all of the money will go to his daughter, even though he claimed to have paid for the singer’s rehab before she died.

“Whitney took Bobbi Kris without my prior knowledge or consent, and moved to Orange County, California, where Whitney received treatment for her drug addiction… Although I was having severe financial problems, I did all I could to see my daughter,” he wrote in a sworn statement during his divorce.

“I came to California to be near Bobbi Kris. I also paid approximately $10,000 for Whitney and Bobbi Kris to live in a nice hotel while Whitney was going through rehab. At the same time, I basically lived out of my car.”

So sad. Here’s hoping they can eventually reconcile. It doesn’t look like that will happen anytime soon, though — the R&B heir is currently rumored to be busy hooking up with her “brother”, Nick Gordon. The teen became an adopted son of sorts to Houston, so the two grew up together. This development has some fans shaking their heads, though — and he’s fighting back!

“Yea we got a little closer and what!!!… All the haters that dont know us or th real story can’t un follow me. I don’t give a f**k. I’ve proved my loyalty to her and the Houston family. I don’t owe any of you anything. Ha I don’t even know y’all haters…. Some ppl have no lives so they gotta be in ours,” he tweeted on Tuesday.

“For the stupid ppl out there she gave birth to 1 child. And she trusted me with EVERYTHING!!!!!!!!!!!!!… She called me her me ‘God Son’ I swear some ppl in this world act like they don’t have a brain…”

Gross or adorable? You be the judge.

Find out more on SheKnows Buzz: