This psychological horror movie starring Clive Owen delves into identity and inherited fear as a monster called Hollow Face schemes to steal the face of a child near you. Just like the layers of dreams in Inception, this film layers parallel nightmares, making for one deep, dark mystery. 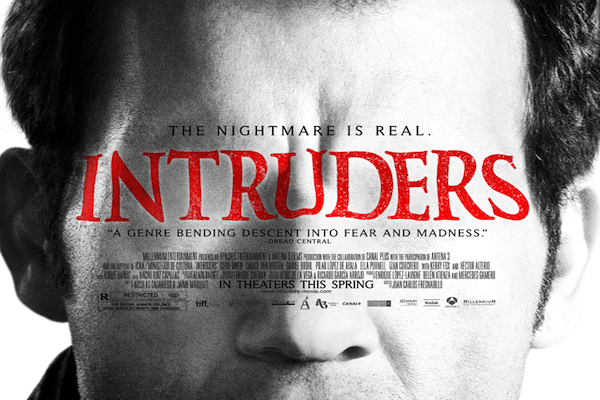 Intruders begins in Spain, with a young boy named Juan, played by Izan Corchero, whose giant imagination has a tendency to go to the dark side. On a stormy night, he tells his mother Luisa, played by Pilar Lopez de Ayala, a scary story about a monster with no face. This monster, called Hollow Face, roams the shadows of the night, looking for a child’s face to steal. As Juan chases after his cat in the rain, a faceless intruder enters the home. Is this intruder real? Juan’s imagination? Could it be Juan’s actual father with dark intensions? We only know both Juan and Luisa are terrified.

Cut to London where we meet John Farrow, played thoughtfully by Clive Owen. After an accident on a high-rise construction site, his life begins a downward spiral. John Farrow’s daughter Mia, played by a beautifully vulnerable Ella Purnell (Never Let Me Go), also finds her life spinning out of control after finding a secret box inside a tree. The mysterious box contains a handwritten story about Hollow Face. As she reads the story, Mia’s imagination conjures the same monster plaguing Juan in Spain.

Juan and Luisa turn to the Catholic Church for help, but the caring priest fails to exorcise the boy’s demons. Luisa is alone to help her struggling, frightened child.

Meanwhile, John reassures his daughter that Hollow Face isn’t real, but when her fear is so intense that she stops speaking, he takes her to a psychiatrist for help. Mia’s struggle parallels Juan’s and is just as frightening. Why is Hollow Face trying to steal these two children’s faces? In a surprising reveal, we discover that Juan and Mia are not just psychologically intertwined, but physically connected as well.

Intruders is short on predictable Hollywood scares and heavy on psychological turmoil. If a monster without a face is a metaphor for a person without an identity, Juan and Mia’s fear mirrors all adolescents as they struggle to understand who they are and who they will become. Naming John’s daughter Mia Farrow is clearly a nod to the classic horror movie Rosemary’s Baby, but I wish Intruders had woven a stronger presence of the demonic that chills you to the core, like in the Polanski film. Instead, we are left with more of a psychological exploration of a father and daughter’s dark imagination than a truly disturbing horror film.

Bottom line:  Not your typical chiller-thriller, Intruders is a well acted and deeply psychological movie that interestingly twists two seemingly unrelated stories together in a structure that will keep you guessing. If you liked mining the layers of story in Inception, you’ll love this movie.