Ben Flajnik scrambled to explain some scandalous photos during last night’s After the Final Rose ceremony. Is he telling the truth? We don’t think so. 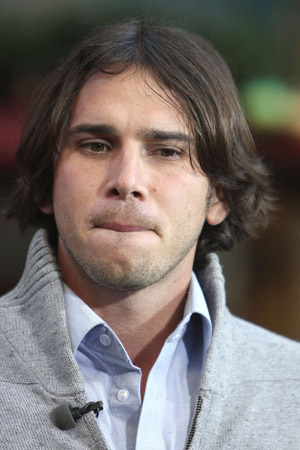 Is newly engaged Ben Flajnik a low down dirty dog? It looks like it — and he’s not afraid of lying to cover his behind. The new fiancé of Courtney Robertson told host Chris Harrison that he’s never cheated on his final rose winner since the show wrapped in November.

However, US Weekly photogs snapped the reality star in compromising positions with several ladies in San Francisco in February. “Ben did not seem to care who saw him, considering his status on a prime-time reality show about finding true love,” a spy told the magazine.

“Those are friends from San Francisco. Those are past photos,” The Bachelor star said of the incriminating pictures. We don’t know about you, but we don’t make out with our friends when greeting them or grab their butts. Maybe Flajnik’s circle is different?

Not so much: Sources tell the magazine that the “friends” in question where actually fans who pursued him. “This woman in red pants came up to him… it looked like an altercation at first, then he kissed her on the mouth and hugged her.”

Maybe it’s because he’s not really with Robertson anymore?

“We were essentially broken up,” he told Harrison. “We had a talk and decided it’s not healthy with all this negative energy,” he added, referring to his chosen woman’s controversial, conniving behavior on the show.

“It became too much, so much that I just cracked. There were a few weeks where we took a couple steps back and reassessed our relationship.”

This all happened around Valentine’s Day, the same time the infamous photos were snapped.

“We were so happy together and then it was like a big storm rolled in,” Robertson told Harrison. “He didn’t send flowers, a card or anything… I was so heartbroken.”

Ultimately, they decided to give their relationship another go — and he put the ring back on her finger while cameras rolled. Will it last? We give it a month, two at the most.

33 mins ago
by Giovana Gelhoren