Another Hollywood couple bites the dust: Jennie Garth and Peter Facinelli have split after 11 years of marriage, the couple confirmed today. 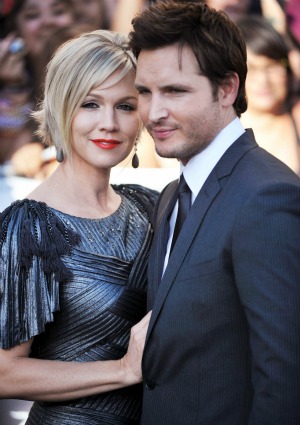 Jennie Garth and Peter Facinelli have filed for divorce after 11 years of marriage, the couple confirmed today.

In a joint statement they said, “While we have decided to end our marriage, we both share the same deep love and devotion to our children.”

“We remain dedicated to raising our beautiful daughters together. We ask for privacy and respect during this time.”

Did Twilight fame take a bite out of this hot Hollywood couple? They are not commenting on what caused the split, but rumors of trouble in paradise have been around for at least a year and heated up last summer with reports that Garth had moved out of the couple’s home.

The former Beverly Hills, 90210 actress even made the ultimate statement and *gasp* unfollowed Facinelli on Twitter!

The pair wed in 2001 and have three children together: Luca Bella, 14, Lola Ray, 9, and Fiona Eve, 5. Garth was previously married to musician Daniel B. Clark from 1994-96, the same year that she met Facinelli on the set of their TV movie An Unfinished Affair.

Facinelli plays Carlisle Cullen in The Twilight Saga. Garth is best known for her roles as Kelly Taylor on the original Beverly Hills, 90210 and the revamped 90210, as well as Valerie Tyler on What I Like About You. We have a feeling Garth will be making out like a bandit in the divorce settlement, considering all that Twilight cash Facinelli has laying around.

Read on for more Peter Facinelli