Last night, Bachelor Ben Flajnik proved he does, indeed think with his pee-pee more than his brain after proposing to smack-talking, skinny-dipping, hair-flipping model Courtney Robertson. Here were some of the moments that had columnist Ashley Spivey cursing at the screen. 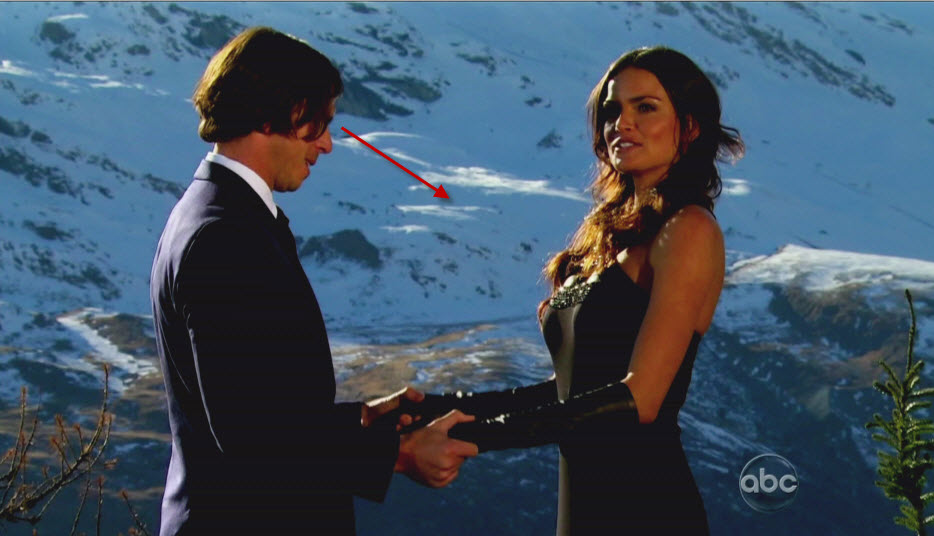 The Bachelor’s Ben Flajnik shows us exactly what he saw in Courtney Robertson all along: A beautiful, um… heart.

Omg y’all I’m so pumped that this season of The Bachelor is finally over! We all knew it was going to be Courtney after the skinny dipping episode, but now we know that he did, indeed, “put a ring on it.”  I was mostly bored for the entire episode but here were 10 moments that either left me laughing, scratching my head, rewinding or screaming “WTF” at my TV.

1. Courtney patting the random cat in the opening sequence.

Are we supposed to believe that she’s nice now because she shows some love to a random street cat?

Trista Sutter to Bachelorette Emily Maynard: Smell all the roses >>

2. Ben’s love for vests during the finale.

Dude definitely has a penchant for quirky clothing (i.e. his mancapri tuxedo and bowties) but these vests were really cracking me up. 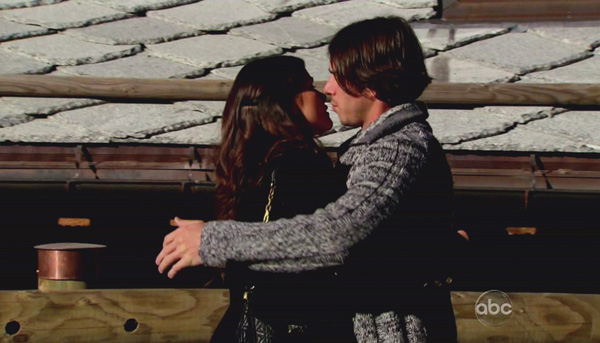 Ben pulls Courtney close to the stylish vest he’s sporting underneath that giant gray man cardigan of his. Sexy!

Don’t get me wrong. I think she has great hair, unlike her brother. I just can’t figure out what type of hairstyle she was going for in this episode. The top had too much volume and she started the curl way too low on her strands. 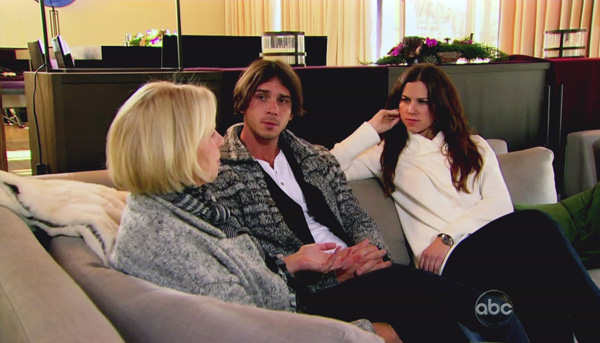 4. The tandem skiing that Ben and Lindzi did on their date. 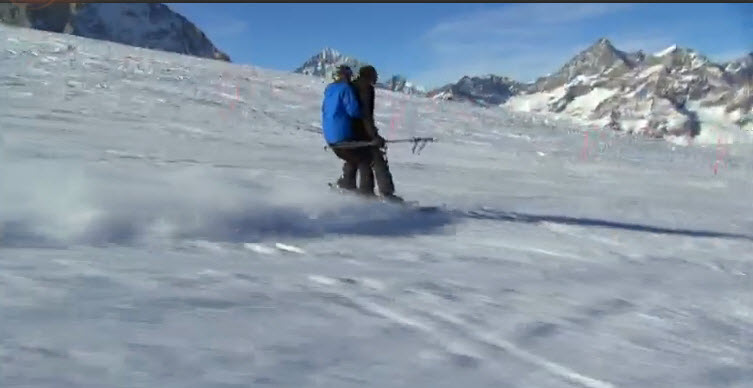 I get it – it was cold at the Matterhorn. Could ABC not get some cute fur (fake of course) coats for the girls to wear? Were there only two capes available and Courtney got to pick first? Did she not even think that her dress and the cape would clash? She looked like a combination of a wizard and Glinda the Good Witch from The Wizard of Oz. 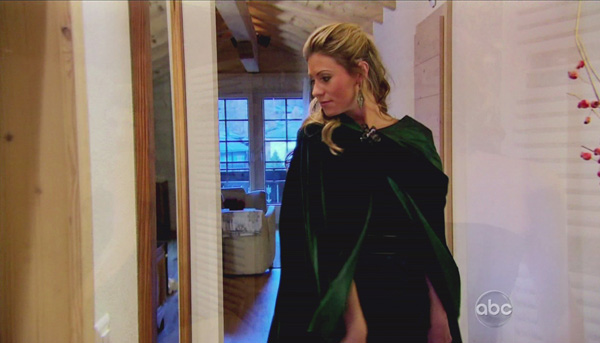 6. The part of the rejection where Ben said he was in love with someone else.

Did Ben really have to say this? I get it, he is in love with someone else but isn’t this kind of twisting the knife in harder? Build the girl up before you let her down, dude! 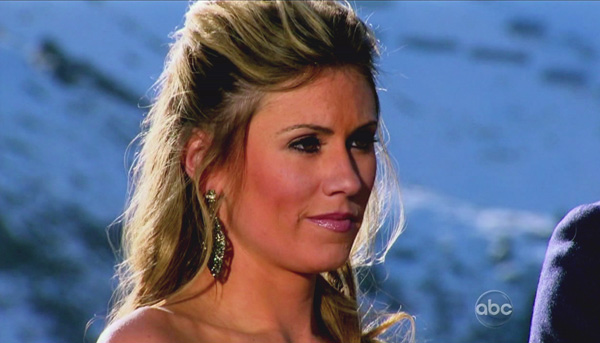 7. The part where Lindzi blamed herself.

Seriously LIndzi? I hope you watched this entire season and this entire episode and then you said to yourself, “Why the hell did I say that?”  You did nothing wrong, girl, and you did put yourself out there. You just didn’t put out in Puerto Rico like Courtney did. 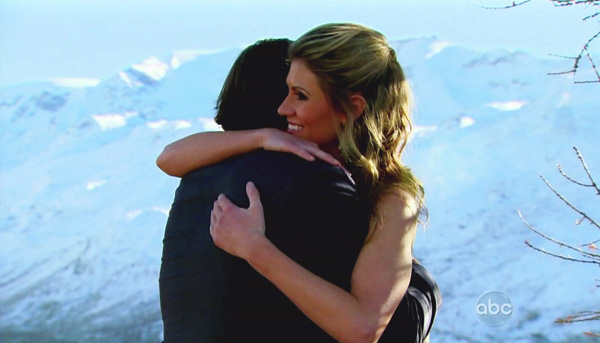 8. Ben not giving any reaction at all when Lindzi said, “Call me if it doesn’t work out.”

Ben didn’t even crack a little smile at this! He didn’t even respond! Give the girl a little courtesy laugh – you just broke her heart, @$$hole!

9. Ben’s rogue strand of hair during his proposal to Courtney.

I couldn’t even pay attention to what he was saying the first time around because I couldn’t stop staring at a clump of hair that was doing whatever it wanted while he proposed to Courtney. Why won’t Ben’s hair just let him be great? Anyone else feel like Ben’s hair was the true villain of the show? 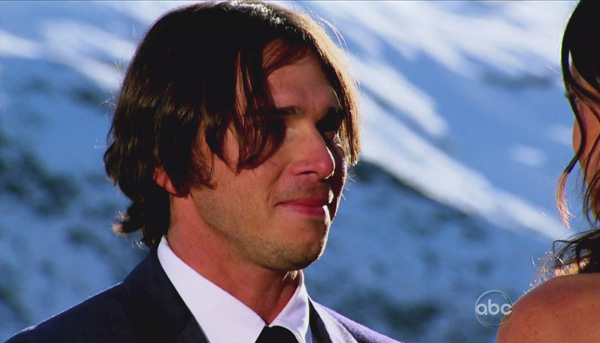 Is it just me or does that thing look exactly like the ring J.P. used to propose to Ashley? I swear Ben picked the same exact ring. Maybe the ring will bring Courtney and Ben the same type of happiness that JP and Ashley have? 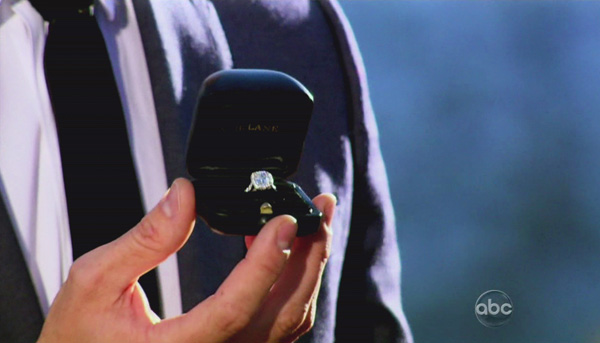 Regardless, it’s once again been a fun season of drama, love, tears, and roses. I can’t wait for Emily Maynard’s season of The Bachelorette and I hope y’all are excited too!

What did you think of The Bachelor finale? Tell us!

Photos courtesy of ABC via Wenn