Can you imagine a day when Anthony Bourdain and Paula Deen will peacefully break bread together? He can — but only if it’s in secret. 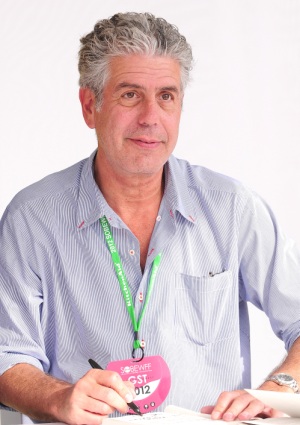 Anthony Bourdain and Paula Deen are poised to go from feuding enemies to dining companions. The pair, who’ve publicly trashed each other’s cooking skills and business moves, may be about to turn over a new leaf.

Anthony Bourdain spoke of Paula Deen in the latest issue of Parade, telling the magazine, “I feel bad for her.” Concerning the southern cooking queen’s diabetes and subsequent endorsement deal he added, “But I would have made different decisions.”

Though the comment remains a light jab at Deen’s diabetes announcement and simultaneous product promotion, it’s a far cry from the heated words these two have exchanged in the past. Even more amazing, the No Reservations host would consider sharing a meal with his rival — but only under hush-hush circumstances.

When asked by the magazine if he would accept a dinner invitation from Paula Deen or fellow cook Sandra Lee, Anthony Bourdain replied, “Without telling anyone? If it’s not part of something cynical, then of course, come on. I’m friends with Ted Nugent for God’s sake. I’m all for someone who reaches out. I would be open. If someone invites you to sit down at their table in an honest, non-manipulative way, then sure, I’ve got a heart.”

The most insulting things Anthony Bourdain has said about Food Network >>

Not only a heart, but a weakness for one particular fat-filled dish that perhaps even Paula Deen would turn down. Divulging his bad food habit Bourdain shared, “My nastiest secret pleasure is the mac and cheese at Popeyes or the Colonel [KFC]. If I get it, I hide the package.”

Do you expect we’ll continue to see Anthony Bourdain’s softer side going forward?