Besides Katharine McPhee and Megan Hilty, another character has been a big hit on Smash — Nick Jonas! The guest star is set to return in the series’ season finale. 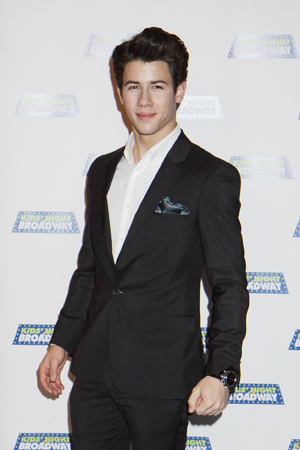 Nick Jonas isn’t only trying and succeeding on Broadway: Before making his lead stage debut in How to Succeed in Business Without Really Trying, he filmed an episode of NBC’s Smash and played the brief but memorable role of Lyle West. The episode aired a couple weeks ago — complete with a few phrases of singing and improvised electric guitar playing — and has apparently earned him an invite to return on the fledgling series’ final episode!

According to The Hollywood Reporter (THR), the Jonas Brother will reprise his role as Lyle West, a teen television sensation who got his first big break as a child actor in the theatre world. (Sound familiar at all?)

His character’s fame is attributed to musical writer Tom (played by Christian Borle) and director Derek (played by Jack Davenport), who have been at odds with each other all throughout Smash’s first season. West also agreed to come on board as an investor in the Marilyn Monroe musical.

Last month, Jonas told THR that he and his character were both open to returning to the show later on. “Lyle’s in this one episode and maybe he’ll come back in the future and be involved in another episode,” he said. “You definitely could see Lyle pop up.”

As the singer incorporates more acting roles into his repertoire, he then focused on his return for the sake of West’s future.

“I think that there has been talk about it, but I haven’t really heard an official word yet,” he said back in February. “Hopefully we’ll hear something soon. If they do have me back it really provides an opportunity for him to get deeper into it and kind of dig in and get more involved.”